Olin Library, dedicated in 1928, has reached the ripe old age of 75. Built by the well-known New York firm of McKim, Mead, and White, and based on original plans by architect Henry Bacon, Olin was constructed during a period of prosperity and expansion at Wesleyan. Three major renovations later, Olin is still a striking and beloved feature of the Wesleyan campus.

Do those grand columns remind you a bit of a famous memorial in Washington, D.C.? Well, there’s a reason for that. In January 1923, less than a year after the dedication of his best-known building, the Lincoln Memorial, Bacon made preliminary sketches for the new Wesleyan library. By that time, he had already completed four Wesleyan buildings—Eclectic (1907), Skull and Serpent (1914), Van Vleck Observatory (1916), and Clark Hall (1916)—as well as developed an overall campus plan (1913) that was never completely adopted. When Bacon died in 1924, at age 56 and at the height of his career, the Olin library project was turned over to McKim, Mead, and White, for whom Bacon had worked as a young architect.

While Olin Library is a unique building, it is not a unique name on college campuses. Both Washington University in St. Louis and Rollins College in Winter Park, Fla., also have Olin libraries, each named for different Olin families or foundations. Our Olin Library honors Stephen Olin, Wesleyan’s second president, and his son, Stephen Henry Olin, Class of 1866, a long-term, influential member of Wesleyan’s board of trustees. Emeline Olin, Stephen Henry Olin’s widow, was a primary donor.

Furthermore, Olin Library was not Wesleyan’s first separate library building. The structure now known as Patricelli ’92 Theater was designed, not by a famous architect, but by Wesleyan’s president Joseph Cummings. He wanted a light and airy new library, in the then-popular alcove style, and he supervised its construction himself. Rich Hall, named after prominent Methodist benefactor Isaac Rich, was dedicated in 1868. By the early 20th century, Rich Hall was nearing its capacity of 80,000 volumes, and planning began for a new university library.

With this experience in mind, Olin was built with an eye to the eventual need for expansion. The architects designed a north wall that could be easily removed and left its façade, facing Andrus Field, unadorned. In 1938, the book stacks were extended to the north, adding a more elaborate façade. A connector to Harriman Hall, including a second reference room, was built in 1956 when Harriman was remodeled as the Public Affairs Center. The opening of the Art Library and the Science Library further eased crowding in Olin, but by the 1970s, Olin was again nearly out of space. Several futuristic ideas, some involving razing Olin, were explored.

Happily, Olin was saved and expanded. Boston architects Perry, Dean, Rogers built a wrap-around addition that nearly doubled stack space, while showing off both the old and new parts of Olin to considerable advantage. Formally rededicated in September 1986, Olin Memorial Library’s renovation had been planned to accommodate projected growth to 2000. Not surprisingly, these predictions proved correct, and a new cycle of library space planning is once again getting underway.

Of course, the history of a library is far more complex than just the history of its building. The current exhibition at the library, which opened in late January and continues through the middle of the spring semester, explores Olin’s history from many angles. Whichever way you look at it, though, it’s clear that Wesleyan’s library, this 75-year-old structure, is thriving. 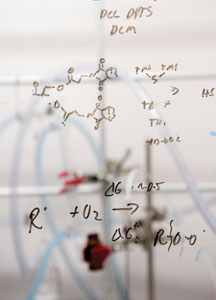 No Need For Quiet