WRITER KAYLIE JONES ’81 learned a few things from her father, James Jones, the prize-winning author ofFrom Here to Eternity and The Thin Red Line. Like the tough, scrappy soldiers portrayed in her father’s gritty tales of war and barracks life, Kaylie Jones is a survivor. She emerged from the tangles of her own past to write, among other novels, A Soldier’s Daughter Never Cries— made into a movie by James Ivory—and the memoir Lies My Mother Never Told Me. In a recent interview with Erica Brown ’81, the two discuss Taekwondo, parenting, Chekhov, and “harnessing … rage into clarity.”

Erica Brown: In your freshman year at Wesleyan, you told your English professor that you had no idea how to write a paper.

Kaylie Jones: Yes! And I’ll never forget it; that was Professor George Creeger. Years later, I went back to Wesleyan and saw George and told him that he didn’t know it but he had saved my life. He came through for me at a time I was really lost. My father had just died; I was a mess. I felt like a fraud being there; I didn’t know what to do. He told me how to go about it. He didn’t give me an A, but I worked and worked and he helped, and I felt I could go on.

Jones: I’d say the two books were the flip sides of a coin. A Soldier’s Daughter Never Cries was a fictionalized version of reality, where the myth that everything’s okay in the family was still intact. I was still drinking at that time. After the movie came out, I had an opportunity to write another version that is a story about the mother. It was 15 years before I was able to tackle that story with any honesty. When I was writing A Soldier’s Daughter, I couldn’t see the forest for the trees—couldn’t see the myth for what it was in the midst of all the details of fictionalized reality and memory. A Soldier’s Daughter is a rose-colored look at my life, and Lies My Mother Never Told Me is a memoir. I had to check facts all the way. I was lucky in this as my father never once threw out a letter. He mimeographed everything and it was all sent to various university archives, so anytime I had a doubt about a date, I’d e-mail those great archivists, who saved me hours and hours of checking. A memoir requires painstaking attention to detail, and most importantly, honesty was its driving force, whereas for A Soldier’s Daughter Never Cries, the myth was still there. When I was writing [Lies My Mother Never Told Me] I felt great. I was controlling things to a certain extent, but when everything was said and done, I would go home and my mother was still dead.

Brown: What saved you?

Jones: Two things; the letters I got from readers whose parents were alcoholics, or schizophrenics, or from families where a great myth was protected by ignoring the reality. They wrote to thank me for the courage to write it down, and I wrote back that it wasn’t courage, it was rage. Then, my Taekwondo master, who has since passed away, taught me that you can’t fight in a rage. For me, it had always been react, react, until I wrote about it. I read Chekhov’s letters, and it’s always about control, and there’s no way to write from rage; I had to harness the rage into clarity.

Brown: What was it like, turning A Soldier’s Daughter Never Cries into a movie?

Jones: It’s hard to let go, but I spent 15 years letting go before that, turning it into a novel instead of a memoir. Then James Ivory decided he wanted to make the novel into a bio-pic, and that was really hard. He wanted the actual details, the right furniture, pictures, décor, all my mother’s things. So it went from being a novel to a detailed portrayal of that part of my life. It was a really weird experience; I had to let go but everything was happening at once. We didn’t know when or if the movie was going to be made. In January of 1997 I got pregnant, and in March James Ivory called. He said, “We got the money and we’re going to start shooting in November in France.” I thought, that’s great, but now I can’t be there. The baby went on 26 flights in the first year of her life, mostly for A Soldier’s Daughter Never Cries and the remake of The Thin Red Line, which was shooting in Australia.

Brown: Is there any part of the movie you wish were different?

Jones: In retrospect, it’s impossible to say. Once the director gets the film, it’s not yours, and that’s fine. Jim [Ivory] felt when he read the book that what he loved, besides the whole American expatriate part, was the character of the best friend, the effeminate guy who loves opera. This character became more of a major part in the film than the character had been in the book — he was the center of the film in fact. The actor who played him, Anthony Roth Costanzo, is now a serious opera star; he was great. I did feel that the brother in the book, played by another great actor, Jesse Bradford, didn’t get enough screen time. The book is more about the brother, where in the film the weight was switched to the best friend.

Brown: One of the hardest things for many writers is knowing when to stop judging yourself so you finish. How do you let go?

Jones: Oh, this is a very important question you’re asking. It’s one of the biggest problems I’ve encountered as a teacher.  Students will self-censor to death, and I know really well that sense of self-flagellating perfectionism and censorship. There’s this voice that says “you don’t have a right to be a writer” or “it’s not good enough.” The whole thing is about silencing that voice so you can produce. I used to drink to silence it, but it wasn’t a solution; it may get you past a few moments but you just pass out at some point and besides, it’s a self-destructive solution. On some level, all writers are obsessive-destructive, and self-abuse is part of the process. What I do is go to martial arts; it’s the one thing that takes me out of the obsessive.

Brown: Let’s talk about parenting. Glamorous childhoods look splendid to others, but like most fairy tales, they are often terribly hard. As a parent, what have you done that’s different from what you experienced as a child in your family?

Jones: I think back, and as a result, the most important thing for me with my daughter has been constancy. Parental love should not be fiery; it’s not a romantic love. Consistency was one thing I never had on a daily basis when I was growing up, and it marked me for life. I never had help with school, and I didn’t do well at school. I didn’t know how to sit down and study; I never knew if my mother was going to be there or not. I’ve focused on consistency with my daughter, being there every day for her. But doing all that for her doesn’t mean there isn’t and wasn’t a huge, gaping wound in me, not knowing how to deal with parenting, not being prepared by example for my own child.

Brown: Do you think that constancy of parenting didn’t matter to your parents, or was it that they simply did not know how?

Jones: I think they thought on one level that I wouldn’t need the tools, that I’d marry, that someone would take care of me. I also think they wouldn’t have known how to provide steadiness, though my father tried and did a lot of that.

Brown: You wrote in A Soldier’s Daughter Never Cries that as a daughter you competed with created characters of your father’s, characters who were treated as real in your family. Is your daughter jealous of your work?

Jones: When she was tiny, she didn’t want me to love anyone except her, but as she has become older, being a writer like me isn’t part of her at all, though she writes very well. She’s very, very good at math. My husband and I didn’t want to nurture the creative arts instinct in her—enough of that in the family—so for her, my writing is not her reality.  She has her own reality.

When I was little, I thought there was no difference between imagination and reality, and that comes from my father. He would start telling a story and I’d get completely caught up in the story as he was telling it whether or not it was true. When he told the story, it was true. He could conceive of a story about people who were real but the story itself was more romantic than the reality, though sometimes not far off. He thought of people in their extremes—very, very nice, or very, very odd, or troubled. He was basically a romantic, and that to me, is what literature, what writing, really is. Fiction is never not true. In part, I wrote Lies My Mother Never Told Me for my daughter, for her to have a record of my side of the story. Families of alcoholics usually hide the alcoholism, and a great deal of energy is spent protecting the myth that everything is fine, or better than fine. I wanted her to grow up knowing the truth and that it’s okay to talk about it. I didn’t want her ever to feel any shame about the situation, and if you as a parent don’t, your child won’t either.

Brown: In Lies My Mother Never Told Me, two scenes stayed with me: your mother leaping out of a bubble bath with you when you were five, writing down the poem you’d made up and rushing to share it with your father. The other is her forgetting to pick you up at school when you were eight years old. Were you always early to pick up your daughter?

Jones: Yes! I’m manic about it. One time, my husband had to pick up our daughter. I was away at a writer’s conference and he had to pick her up from a school dance. He was only ten minutes late—he lost track of time at work—but she was standing alone outside the school at night. I went crazy, out of proportion to the event. Or I’m not sure, maybe it wasn’t out of proportion. When you’re laying to rest such ghosts, you never know if your reaction is appropriate or not.

Brown: You write that your father raised you, a soldier’s daughter, to fight back. How much of your life do you owe to that legacy?

Jones: I think that without it, I’d have been paralyzed by fear. My first reaction to fear is to fight. In the long run, I never crumbled or gave in, and it’s probably why I’m still alive. I ran when I was drinking but I fought back to live. What I have learned to do over the years—or am still trying to learn to do—is not to be so reactive, how to sit with feelings and be able to deal with them not in anger, how not to come out in full battle gear for things that are not such a big deal. Martial arts helped me with that. Now, I don’t have to react to that extent, but back then, I had to, to survive. The fact that I did fight is what saved me.

Kaylie Jones ’81 is a novelist, with her seventh book, The Anger Meridian, in the works. She lives in New York City. | Erica Brown ’81 is a freelance writer and editor. She lives in Montreal. 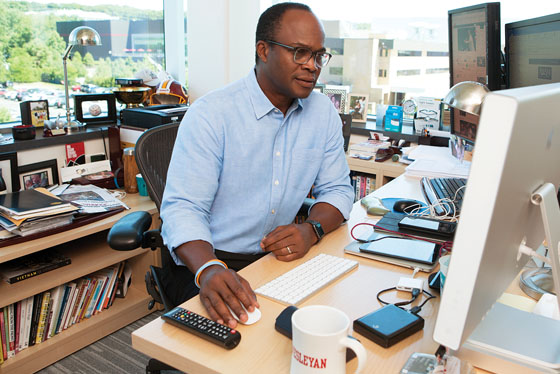