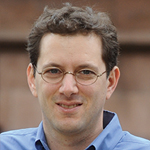 In Storm Surge: Hurricane Sandy, Our Changing Climate, and Extreme Weather of the Past and Future (Harper Wave, 2015), atmospheric scientist Adam Sobel ’89 explains the remarkable atmospheric conditions that gave birth to the destructive 2012 storm and considers what the event might mean for the future.

I used to think global warming was boring. That opinion has changed.

At Wesleyan, I had been a double major, music and physics, and I wanted to be a musician when I graduated. After a couple years of trying, I decided it wasn’t working out and thought I’d get a PhD in physics. My girlfriend at the time—wife now—said that if she had my background, she would choose meteorology and study global warming. This was about 1992, when not too many people cared about climate yet; she was a hardcore environmentalist and ahead of her time. I found global warming scientifically dull, though—something about its slowness, and the fact that the basic physics seemed well understood already.

But I did come around to the idea of studying meteorology, and this career change story is in the book. It seemed relevant to my chapter on the history of weather forecasting in which I write about the great Vilhelm Bjerknes. He also made a career change from physics to meteorology—before revolutionizing his new field as the first to conceive that weather could be predicted using the laws of physics.

The book grew out of the sudden public exposure that Sandy brought me. I started getting calls from reporters during the week before landfall. Then the media interest snowballed, and I gave many, many more interviews: first as the storm hit, and then, in the aftermath, for radio, TV, and print. In the succeeding months, I began giving public talks about Sandy in various non-academic settings. Until this point, I had been speaking and writing just for colleagues and students in my field of atmospheric science, plus maybe the occasional appearance in my childrens’ classrooms.

A few weeks after the storm, I gave a lecture in the “Secret Science Club” series, at a rock club in hipster Brooklyn right near the Gowanus Canal, which of course had flooded with Sandy. Several hundred strangers filled the room with an attention more rapt than any I had experienced in almost 20 years of speaking to scientists. Hands flooded the air when I finished, and the questions stopped only when the organizers said time was up. My understanding of my job as a scientist was transformed.

I had consciously wanted to write a popular science book, though, for some years. I just hadn’t had a good enough idea either to actually write a book or to sell a proposal to an agent or publisher. So then Sandy happened, and suddenly everyone wanted to talk to me. After a couple of weeks, I realized that the universe was telling me that my book should be about this storm.

The connection between Sandy and human-induced climate change is a critical part of the book, but the message is not simple. I had worked a lot on the question of how hurricanes are influenced by climate, and I knew I couldn’t draw a strong connection between the storm itself and global warming. The science doesn’t justify it, especially because Sandy’s enormous size and unprecedented track made it a very unusual hurricane, outside the parameters of most existing research. But sea level rise, a consequence of warming, contributed the better part of a foot to the water’s depth, and will certainly continue to increase the risk of coastal flooding disasters in the future. And we are pretty certain that hurricanes are getting more intense over the long term as the planet heats up.

I had ceased being bored by global warming years earlier. I had learned more about it, of course, and it’s now clearly the central question in my field. If I were a doctor in a place where people were dying from a flu epidemic, I couldn’t have the luxury of thinking the flu was boring. But Sandy brought it home in a new way, by making me see the vulnerability of my own hometown.

Why was New York City’s infrastructure so devastated by Sandy? Scientists and government officials had known for decades just how vulnerable it was, and that a disaster just like Sandy was going to happen someday. The investments necessary to protect the subways, the power grid, and the low-lying neighborhoods weren’t made. Why not?

History and psychology teach us that people don’t prepare well for risks that are outside our experience, and Sandy was that. With my wife (the same one, now a wetlands scientist whose professional life was also changed by Sandy), I went to the Netherlands while I was writing the book to see the impressive flood control structures there. One thing I learned is that the Dutch are no better than we are at being proactive. They didn’t build those structures until after a catastrophic flood in 1953.

The human tendency to reactiveness is a serious problem when we think more broadly about global warming. Almost by definition, the climate to come will be outside our experience, so we can’t quite visualize it, and we have a hard time making investments now to mitigate it. But it’s much, much better not to emit the carbon in the first place than to try to deal with the consequences later.

So the strongest connection between Sandy and global warming may the one in our minds. The disaster helped us see the consequences of failing to prepare for what science tells us is coming. Maybe we can learn to overcome human nature and take action before the worst is upon us.

Adam Sobel is a professor at Columbia University, where he studies weather and climate. He lives in New York City with his wife, Marit Larson ’89, and two teenage sons. He blogs quasi-regularly at adamsobel.org.

Largest Binge-eating Study Will Include Men