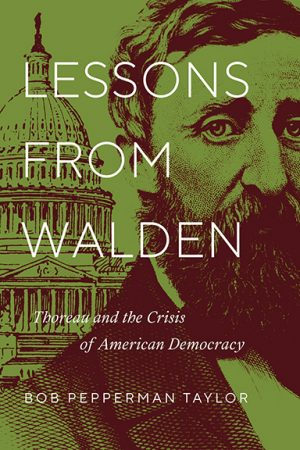 In his new book, Lessons from Walden: Thoreau and the Crisis of American Democracy (University of Notre Dame Press, 2020), Bob Pepperman Taylor does more than examine the philosophies of Henry David Thoreau and his famous work. He ushers them into the 21st century, exploring how we may interpret Thoreau’s ideas in today’s chaotic, ever-changing world. A government major at Wesleyan, Taylor is the Elliott A. Brown Green and Gold Professor of Law, Politics, and Political Behavior at the University of Vermont. Lessons from Walden is his eighth book.

Walden was published in 1854, and has since become a classic work of American literature. What makes it so compelling?

Bob Pepperman Taylor: Thoreau asked a combination of questions that never go away. He asked about the relationship of our democracy to the way that we relate to the natural world around us. These weren’t separate questions for him. He thought that the way we related to the natural world was going to have a deep impact on the way we related to one another as democratic citizens. Today we have a deep, deep crisis of democracy and a deep, deep crisis of the environment. This is not unique to the United States, of course. If nothing else, Thoreau was the first important American thinker to really think seriously about the relationship of how we organize ourselves politically to how we organize ourselves in relationship to the natural world. That’s why I’m drawn to him and why I keep coming back to him. It doesn’t mean that I think he got everything right; in fact, on the contrary. But it does mean that I think he’s in some ways a foundational thinker and that Walden is a foundational text in that sense.

Thoreau advocated withdrawing from political life. He did it himself. Is that practice relevant to our current state of democracy?

BPT: Thoreau has some important things to say about how we can orient ourselves in a way that will allow us to be responsible and free. He thinks that it’s easy to feel like you’re not in charge of your life, and one of the things he says is, “Listen it’s actually possible to reclaim some real control over your own life. . . . If you want to be free, there are ways of living modestly, of learning to live with less, of learning to live very purposefully.” One of my favorite lines in Walden is, “We think that we can change our clothes only.”

How can we trace Thoreau’s impact on our world today?

BPT: Thoreau’s lessons are still informing movements in American society. For example, the organic farming movement, the farm-to-table and locavore, and local-economy movements are about people deciding to live less affluently and more freely. I think that Wendell Berry, the great farmer-poet-novelist in Kentucky, is a great modern Thoreauvian.

Related to those Thoreauvian movements is a notion that we need to be responsible for the life that we live. It’s very easy not to keep track of our relationship to the rest of the world. We just go about our business, we live our life, we spend our money, we do our jobs—we don’t think about the impact that our actions have on everyone around us. Thoreau says you’ve got to think about that. Part of being a free person is being a responsible person.

There’s a real notion of neighborliness, of personal responsibility, that he emphasizes. I don’t think he gives us everything we need to know about how to be a good democratic citizen, but he does tell us something about the foundations of it. And I think those foundations are neighborly. Right now in our society we’ve become so deeply segregated residentially that neighborliness doesn’t even come close to the ideal that Thoreau had in mind. It seems to me that a lot of people who are thinking seriously about how to deal with our problems in America today are talking about the deep and unhealthy divisions and segregations in American society. I think Thoreau has a sense of that and gives us some guidance about this neighborliness that would be important as a foundation, as a first step toward learning how to democratically deal with one another.

Some have called Thoreau the original social-distancer (in reference to the safety guidelines advocated during the COVID-19 pandemic). How much truth is there in that statement?

BPT: He really did think that we should learn to be alone. To enjoy our solitude and to have space to think. Thoreau was very concerned about how to educate yourself to be independent and responsible as a thinker. But the move to Walden was not a move to isolation. The “hermit of Walden Pond” [a nickname Thoreau was given] is just not right. Walden Pond was full of people, and he writes about it in Walden. People visited all the time. Trains went bombing by a couple times a day at the end of the pond. He was only a mile from the center of the village.