When I first met Lin-Manuel Miranda ’02 in 2006, he hadn’t won a single Tony. I was writing a story for the Wesleyan Argus about a theater industry panel at the Career Resource Center, and he was a presenter. He radiated excitement as he spoke about the play he had been working on since his Wesleyan days, one that was about to open for a short off-Broadway run. “I wrote In the Heights because I wanted to write a musical featuring Latinos who weren’t having knife fights,” he told me with a wry smile.

Almost three years later I found myself at the Richard Rodgers Theater in New York City, surrounded by Wesleyan supporters of all ages. The Wesleyan Cardinal threaded his way through the throng, stopping occasionally to pose with his wing around someone’s shoulder. Four Tony Awards, thirteen nominations, and one wildly successful move to Broadway later, we had gathered to celebrate Lin-Manuel’s creation.

And celebrate we did. The audience applauded enthusiastically when Lin-Manuel made his first appearance, and they gave him an extended ovation when he made his curtain call in a WesWings shirt.

“We ate at WesWings and now we have the Tony for best musical, how cool is that?” he yelled jubilantly, then led the crowd in a raucous version of the Wesleyan fight song. Moments later, President Roth revealed that the benefit had raised money for 38 scholarships.

That night was the first time I was able to truly grasp what it means to be a Wesleyan alumna. In the months since my graduation in May of 2008, I had been struggling to comprehend what it means to leave college and the familiarity of “studenthood” behind.

“It has been almost effortless to remain blind to everything but campus issues. Without realizing it, my student identity has slowly infiltrated my sense of self?.Who are you, who are we, if not students?” I had written years before in an Argus column. Settling into my seat as the lights went down to start the play, I was faced again with that question, intensified by my recent departure from campus. I had spent my life working toward a college degree and in the process had become accustomed to the academic and creative challenges education provides. What would happen to my drive and intellectual interest when opportunities to create and explore were no longer within easy reach?

While an undergraduate, I went to lectures by authors, filmmakers, or scientists visiting their alma mater, but until that night I had never seen the potential of those Wesleyan alums as my potential, had never really believed that I could reach for, and experience, similar successes. Seeing Lin-Manuel perform helped me make that connection. His accomplishments were more to me than just another news story: I had seen his transformation for myself. The remarkable results of the fundraiser buoyed my spirits, as well, as I saw up close the power a Wesleyan graduate can have to bring his community together and to do something profoundly good for that community. That night I was finally able to include myself in the same group as the people I had admired from afar. And that meant that all the ways they had found to continue learning and creating on their own terms were paths that I, too, could follow.

As we milled around the lobby at the beginning of the night, it seemed that almost the entire class of 2008 had turned out. “It’s a big Wesleyan party!” someone near me crowed. Later, as the crowd sang gleefully along with Lin-Manuel, I understood that graduation doesn’t mean that the party has to end. The venue may change as we trade dorms and dining halls for apartments and cubicles, but the world can be our university now, if we let it, even without a fight song to sing or a cardinal to pose and preen. We ate at WesWings and now it’s our turn to make our mark. In the Heights reminded me of the peaks one can scale as a Wesleyan graduate. This new terrain is a scary, profoundly unfamiliar, and intensely exciting one to begin to explore. 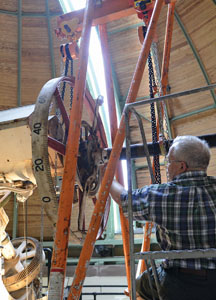