When the organizers of Make Music New York went looking for someone to conduct the East Coast premiere of Henry Brant’s Orbits in the Guggenheim Museum, they were led naturally to Professor of Music Neely Bruce.

Bruce, a longtime friend of the late composer and co–executor of Brant’s musical estate, was instrumental in Wesleyan’s awarding Brant an honorary doctorate, and oversaw the premiere of Brant’s Meteor Farm at Wesleyan in 1982.

Bruce is no stranger to organizing small armies of musicians in complex performances, a skill that was essential for mounting a performance of Orbits. Described by New York Times reviewer Anthony Tommasini as “one of the most mesmerizing and eclectic works ever written,” Orbits calls for 80 trombones, a soprano vocalist, and an organ. You can’t just pick up the phone and get 80 trombonists.

Bruce, meeting in mid–April at La Boheme restaurant with Charles Fabius, the Guggenheim’s director of its Works & Process performing arts series, agreed that if they could rustle up half the required trombonists by May 1, then the project would go forward. Bruce turned to renowned trombonist and composer Stuart Dempster, who in turn led Bruce to freelance trombonist Monique Buzzarte. She had played in Orbits in 1984 in San Francisco, and she proved invaluable in recruiting dozens of musicians. By May 1, the halfway mark was reached even though Bruce was on leave at the University of Illinois to attend performances of his Hansel and Gretel opera.

Henry Brant, who died in 2007 at age 94, regarded space as another dimension of music and intended Orbits to be performed by groups of trombones occupying different spatial niches around the audience. The Guggenheim, with its walkways that encircle the central rotunda, lent itself to realizing this vision. But there was a hitch. A committee at the Guggenheim had become concerned that the decibel level of the performance might reach a point where damage could be done to an exhibition of Frank Lloyd Wright original drawings and models.

Although Bruce thought the likelihood of damage was next to nil, he nonetheless had to have a plan B, the Church of the Heavenly Rest at 90th Street and Fifth Avenue. An architect friend enlisted the aid of a structural engineer to convince Guggenheim officials that their concerns were unfounded.

Meanwhile, Bruce had to rehearse the 85 trombonists he rounded up to perform in eight groups of 10 musicians (the extras came in handy when some musicians pulled out at the last moment). He sought out space in the band room at Yale, Grace Church in Brooklyn Heights, at the New York Guitar School, and at Judson Memorial Church on Washington Square Park. At the latter location, the trombonists wound up playing for attendees at a spaghetti supper, where they were a huge hit and helped spread word–of–mouth endorsement the night before the scheduled full performance.

Bruce faced myriad details, such as the need to get enlarged sheets of music for an elderly trombonist, which turned out to be anything but easy in a city where copying shops are well aware of copyright restrictions.

The Guggenheim staff finally consented to the performance. A member of the technical staff went so far as to make a special top for his music stand that would accommodate the exceptionally large Henry Brant score.

During the performance, Bruce could not use a traditional baton because the musicians arranged on the ascending walkway could not see it. They could see, however, the black arms of his tuxedo, so he relied on enormous gestures to conduct, all the while feeling increasing strain from placing much of his weight on one foot, for he, too, was standing on the ramp.

New York’s fire code allowed for only 300 listeners to occupy the floor of the rotunda during each of the two, 25–minute performances in June. They heard performances that won stellar reviews. The Times said Brant’s “vision was excitingly realized at the Guggenheim.” The New Yorker’s Alex Ross said, “Composer Neely Bruce conducted expertly from the lower part of the ramp, and the audience gathered on the floor below. The golden sheen of the instruments contrasted with the creamy white of the walls and the blue of the skylight above. There were two performances, and I stayed for both, guessing that I would never hear, see, or feel anything like it again.”

Completely exhausted by the end of the second performance, Bruce said, “It was the thrill of my life in conducting.” 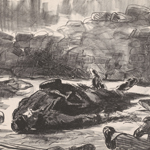