Last spring I went to my first game at the new Yankee Stadium. I went with my 6–year–old son, Harry, who like me, is more a partisan of the crosstown Mets. We had already made a pilgrimage to the new Citifield, which Harry has called “Silly Field”—not quite appreciating the irony. Now it was time to see the new stadium in the Bronx.

As we were driving to the game, Harry turned to me and asked, “Dad, are the Pirates in Pittsburgh?” I told him they were and then he quizzed me about other teams and their home towns. Red Sox: Boston. Giants: San Francisco . And so it went as we headed north.

When it was my chance, I turned the question around. “OK, where are the Cardinals from?” Without a pause, his certain response was “Wesleyan.”

Expecting St. Louis, I was about to correct him. Then, I realized that Harry’s response deserved more than partial credit. He was right, of course, Cardinals do play at Wesleyan.

Harry’s reminder also prompts me to share some very good news about Wesleyan Baseball. Like the Mets and the Yankees, this spring the Wesleyan Cardinals will also have a new home field.

The Board of Trustees voted last May to name the baseball diamond at the foot of Foss Hill Dresser Field in honor of Chair Emeritus of the Board of Trustees, James B. Van Dresser and the many generations of his family who attended Wesleyan.

Anyone with a glancing familiarity with Wesleyan inside–baseball knows that Jim comes from a long line of WesAlums and that his contributions to the university over decades have been record–breaking. Most recently, he brilliantly led the university as Board chair during the presidential transition. His understated leadership and stewardship during that critical period were indispensable.

It is often said that baseball is a metaphor for life. In the case of the high honor bestowed on Jim Dresser, Wesleyan recognizes a team player who has done everything but play right field for the university. He has been both a utility player and an all–star for his beloved Cardinals, accepting all the requests for his talents with equal equanimity. During his many years of service, Jim has been both coach and friend to all his many teammates. By naming that patch of green Dresser Field, the university pays tribute to a clutch player who has made sure that Wesleyan always remains a field of dreams. May the Cardinals have a winning season on their new home turf!

PICK OF THE SYLLABUS: An Emigré in Academe 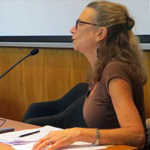