In writing this first major biography of one of the most influential and smartest figures in baseball history, Dickson used primary sources, including more than 100 interviews, to tell the story of Bill Veeck (1914–1986), who was a baseball impresario, an innovator, and a staunch advocate of racial equality. Admired by baseball fans, Veeck was known for his promotional genius for the sport, while his feel for the game led him to propose innovations way ahead of their time. His deep sense of fairness helped usher in free agency, breaking the power owners had over players. He purchased the Cleveland Indians in 1946—the first of four midwestern teams he would own. In 1947, Veeck integrated his team by signing Larry Doby, the American League’s first black player, and hiring the first black public relations officer, trainer, and scout. A year later, Veeck also signed the legendary black pitcher Satchel Paige, who helped win the 1948 World Series.

Crisis—whether natural disaster, technological failure, economic collapse, or shocking acts of violence—can offer opportunities for collaboration, consensus building, and transformative social change. Communities often experience a surge of collective energy and purpose in the aftermath of crisis. Rather than concentrating on government and private-sector efforts to deal with crises through prevention and mitigation, this book examines ways to harness post-crisis forces for recovery and change through innovative collaborative planning. Drawing on recent work in the fields of planning and natural resource management, the study examines a range of efforts to enhance resilience through collaboration, describing communities that have survived and even thrived by building trust and interdependence. These collaborative efforts include environmental assessment methods in Cozumel, Mexico; the governance of a “climate protected community” in the Blackfoot Valley of Montana; fisheries management in Southeast Asia’s Mekong region; and the restoration of natural fire regimes in U.S. forests.

Holsti’s study explores the extent to which changes in public opinion reflected the vigorous public relations efforts of the Bush administration to gain support for the war and the partisanship marking debates over policies toward Iraq. The opening chapter considers the relations between the United States and Iraq before going to war with each other. Holsti then explores the ways in which the Iraq experience has led substantial numbers of Americans to reconsider their nation’s proper international role. Other chapters examine partisanship and the impact that public opinion has had on policymakers. Holsti places his research in a broader context to address the roles of public opinion and of the media in democratic governance.

Lawrence Jackson ’90
My Father’s Name: A Black Virginis Family after the Civil War • THE UNIVERSITY OF CHICAGO PRESS, 2012

Part detective story and part wrenching family history, this book delves into the history of the author’s family in slavery and emancipation in Virginia’s Pittsylvania County. Jackson’s research led him to the house of distant relations, and he became absorbed by the search for his ancestors and aware of how few generations an African American needs to map back in order to arrive at slavery, “a door of no return.” Jackson delved into libraries, census records, and courthouse registries and traced his family to his grandfather’s grandfather, a man who was born or sold into slavery but who, when Federal troops abandoned the South in 1877, was able to buy 40 acres of land. Jackson’s book vividly reconstructs moments in the lives of his father’s grandfather, Edward Jackson, and great-grandfather, Granville Hundley, and gives life to revealing narratives of Pittsylvania County, recalling both the horror of slavery and the later struggles of postbellum freedom.

This engrossing work considers large-scale theater productions that often run five hours or more and present special challenges to the artists involved as well as the audience. Kalb takes a close look at seven internationally prominent theater productions, including Tony Kushner’s Angels in America, Robert Wilson’sEinstein on the Beach, the Royal Shakespeare Company’s Nicholas Nickleby, Peter Brooks’ The Mahabharata, and the “durational works” of the British experimental company Forced Entertainment. Kalb reconstructs each of the works, recreating the experience of seeing them, while at the same time explaining how they maintained attention and interest over so many hours, and then expanding the scope to embrace a wider view and ask broader questions. The discussion of Nicholas Nickleby, for example, considers melodrama as a basic tool of theatrical communication, and the section on Peter Brooks explores the ethical problems surrounding theatrical exoticism. The book places the productions in various historical and critical contexts and engages with the many lively scholarly debates surrounding them.

An artist who plans to draw clothing and drapery effectively must learn to recognize the basic shapes of clothing and how the principles of physics act upon those shapes. Massen presents his thorough and novel approach to drapery by first describing clothing and drapery as basic shapes, and then illustrating how the mechanics of physics cause these shapes to bend, fold, or wrinkle in predictable ways. Massen explains how to use these concepts to depict all types of clothing in a variety of mediums. He focuses on the mechanical principles behind the formation of folds and breaks down all clothing into three types: sculpted forms, loose drapery, and, most especially, tubes. Also covered are various techniques for rendering clothing, including how factors such as the stiffness, thickness, and texture of a particular material can affect the appearance of an article of clothing. This resource contains helpful illustrated techniques and examples from old-world and contemporary masters.

Lily Raff McCaulou ’02
Call of the Mild: Learning to Hunt My Own Dinner • GRAND CENTRAL PUBLISHING, 2012

Raff McCaulou was raised as a gun-fearing environmentalist and an animal lover, and she stuck by the principle that harming animals is wrong. But her views changed when she left an indie film production career in New York to take a reporting job in central Oregon. For her articles, she began spending weekends fly-fishing and weekdays interviewing hunters, and she found that some of them were quite thoughtful about their relationship with animals and the environment. She eventually met her husband, Scott, who took her fly-fishing. In this memoir, Raff McCaulou writes about her decision to learn how to hunt—attending a Hunter Safety course designed for children, buying her first rifle, and field dressing an elk and serving it for dinner. She dispels some negative stereotypes about hunters and tackles large issues surrounding a sometimes-misunderstood American practice and pastime. She also explores the role of the hunter in the 21st century, the tension between hunters and environmentalists, and new models of sustainable and ethical food procurement.

Rappoport explores the literary expression and cultural consequences of English women’s giving from the 1820s to the First World War. During a period when most women lacked property rights and professional opportunities, gift transactions allowed them to enter into economic negotiations of power as volatile and potentially profitable as those within the market systems that so often excluded or exploited them. Rappoport shows how female authors and fictional protagonists alike mobilized networks outside of marriage and the market by considering the dynamic action and reaction of gift exchange in fiction and poetry by Charlotte Brontë, Elizabeth Barrett Browning, Elizabeth Gaskell, and Christina Rossetti, as well as in literary annuals, Salvation Army periodicals, and political pamphlets. Through giving, women transformed the primary allegiances of their everyday lives, forged public coalitions, and advanced campaigns for abolition, slum reform, eugenics, and suffrage.

Viral storyteller and advertising expert Sachs draws upon case studies from his own body of work and some of the most successful brands of all time to show how values-driven stories can influence and revolutionize marketing. The book suggests that marketers can take on the role of heroes with the possibility of transforming not just their craft but also the enterprises they represent. The author shares insights culled from mythology, advertising history, evolutionary biology, and psychology. His book considers how (1) social media tools are driving a return to the oral tradition, in which stories that matter rise above the fray; (2) marketers have become today’s mythmakers, providing society with explanation, meaning, and ritual; (3) memorable stories based on timeless themes build legions of eager evangelists; (4) marketers and audiences can work together to create deeper meaning and stronger partnerships in building a better world; and (5) brands like Old Spice, The Story of Stuff, Nike, the Tea Party, and Occupy Wall Street created and sustained massive viral buzz.

In this amusing children’s story, a boy finds friendship with an unusual pet snake—a gift from his father—much to the dismay of his mother. As it turns out, the green snake has exceptional abilities, such as twisting his body into words and helping the young lad with his homework. Siegel’s entertaining tale is illustrated by award-winning artist Serge Bloch. Publishers Weekly called the book “…a loving salute to the unconventional pet heroes of an earlier era.”

This narrative history of U.S. gay and lesbian activism offers a short, accessible overview of an important and transformational struggle for social change. It covers key individuals and events, influential groups and networks, important alliances and coalitions, difficult challenges and obstacles, major successes and failures, and the movement’s lasting effects on the country. As he focuses on four decades, Stein examines the changing agendas, beliefs, strategies, and vocabularies of a movement that encompassed diverse actions, campaigns, ideologies, and organizations. From the homophile activism of the 1950s and 1960s, through the rise of gay liberation and lesbian feminism in the 1970s, to the multicultural and AIDS activist movements of the 1980s, this book provides a strong foundation for understanding gay, lesbian, bisexual, transgender, and queer politics today.

This volume brings together Yankelevich’s poems and prose texts written over the course of the first 11 years of the millennium. The collection contains works from the writer’s several serial projects (such as Writing in the Margin or The Bar Poems) and stand-alone poems. Many of these pieces have appeared previously in progressive literary journals and magazines. Yankelevich comments: “Alpha Donut’s title comes from an old-school coffee shop in Queens, near my first NYC apartment. I used to write poems there, listen to regulars, and hang out with a few close friends over cheap coffee. This didn’t happen all that often, actually, but it was a type of atmosphere—and, one might even say, ethic—that is reflected in this pastiche of a book. I attempted not to give too much weight to any one type of poem, to keep the book moving between funny and serious, melancholy and exuberant, one-liners and meditations.”

If you are a member of the Wesleyan community with a new book, please let us know by contacting David Low at dlow@wesleyan.edu. Please send a review copy of your book to David Low c/o Office of University Communications, Wesleyan University, South College, Middletown, CT 06459.

For news about recent faculty publications, please see the Faculty Bookshelf at www.wesleyan.edu/academics/faculty/bookshelf.html 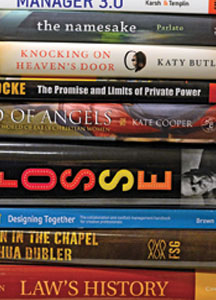