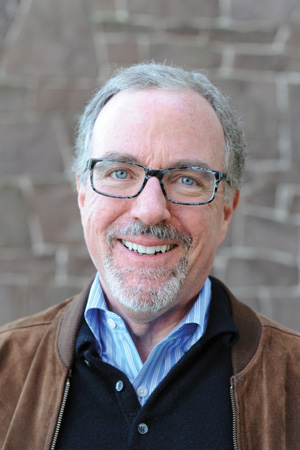 In his role as 2013 Distinguished Teaching Fellow, Andy Szegedy-Maszak, Professor of Classical Studies and Jane A. Seney Professor of Greek at Wesleyan, brought a slice of Wesleyan to members of the Wesleyan community—alumni, parents, admitted students—living in select cities on the West Coast.

The Distinguished Teaching Fellowship—which Szegedy-Maszak is the first to receive—offers the professor the opportunity to teach a course outside of his/her usual departmental offerings. Szegedy-Maszak is teaching a course through the Allbritton Center for the Study of Public Life on photography and its effect on social movements. It was this topic he explored in his WESeminar on the Road, which took him to San Diego, Los Angeles, San Francisco, and Seattle.

His talk included a discussion of Jacob Riis’ photos of tenement dwellers in New York City during the late 1800s, published in the famous book How the Other Half Lives, along with images of Depression-era tenant farmers in Let Us Now Praise Famous Men by writer James Agee and photographer Walker Evans. Additionally, Szegedy-Maszak analyzed one other photograph that helped focus his thoughts on the ability of photography to influence social change.

“A couple of years ago I was asked to do one of the lectures when the new students arrive on campus, and I started thinking about the depiction of hunger in photographs. There’s one iconic image of a little African child crumpled in a field with a vulture standing behind her. As I started investigating it, the topic got more and more vivid for me. There’s been so much discussion lately about how photography is used to depict suffering. In Susan Sontag’s last book, Regarding the Pain of Others, she said, ‘Being a spectator of calamities taking place in another country is the quintessential modern experience, the cumulative offering by more than a century and a half’s worth of those professional, specialized tourists known as journalists.’

“I think she’s right,” says Szegedy-Maszak, who counsels against the very real possibility of becoming jaded in the face of all this pain made visible.

In the West Coast seminars, he traced the history of these iconic photographs and then turned to the audience with discussion questions. “How has photography as an agent for social change morphed in the Internet age?” he asked. Lively conversations ensued on the role of editors (everything gets out there; we don’t have filters), the ability to manipulate images (do younger audiences view photographs as having less veracity?), and the galvanizing effect of fast and widespread dissemination of images via cell phones (as those in the recent Occupy movements witnessed).

Reflecting on the traveling WESeminar experience, Szegedy-Maszak says, “I was touched by the opportunity and pleased that I could participate in it. It was a great pleasure to see former students and old friends, and to make new ones. What kept me going were the energy and the enthusiasm and the real engagement the attendees brought to the seminar.

“We occasionally use the phrase lifelong learning and apply it to courses for folks who are older and retired. One of the things I saw is that lifelong learning is not restricted to any age group. Any good liberal arts education will leave its graduates always wanting to learn more.”