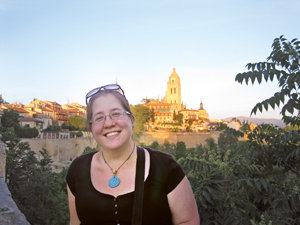 It’s a Friday afternoon in mid-May, and while Reunion & Commencement Weekend is ramping up in Middletown, I’m on a train speeding through the Spanish countryside, listening to the Wesleyan Spirits and feeling nostalgic. Due to contractual obligations—I work in the public schools here—I’m unable to fly back and attend my fifth Reunion. Although I love Spain, missing Reunion is harder than I expected.

In the past weeks, my Facebook feed has been aflutter with excitement as friends booked hotels and news arrived of big-name panels and intriguing workshops. Finally, in a fit of melancholy and nostalgia, I’ve decided to spend this weekend in Madrid, where I’ll create my own mini-reunion with Alex Provo ’10, who lives in Florence. I’m not sure what I’m hoping for exactly, only that the thought of my friends lounging on Foss Hill or talking late into the night in the Hewitt dorms without me is depressing. They may be spending the weekend expanding their minds and eating at WesWings, but I intend to find the best possible equivalent.

After warming up on the train watching some Wesleyan-themed How I Met Your Mother on my laptop, I meet Alex and a Spanish friend, Ander, for dinner at Harvey’s in the Fuencarral neighborhood. There aren’t many American restaurants in Spain, but this one does a decent job of approximating the diner experience. We gorge on passable nachos, an “American breakfast” (a fried egg; two decent pancakes; and, inexplicably, a hot dog), and a chocolate milkshake that almost lives up to the legendary shakes at the Athenian, a Middletown favorite during my Wes years. We spend the meal giggling and making a mess; it’s easy to imagine we’re taking a break during finals and soon will head back to campus.

Later, we wander the narrow streets of Malasaña, choosing to stop at a hole-in-the-wall called La Palmera, with its ancient wooden bar and exquisitely detailed blue tiling. Over drinks, we discuss our favorite college classes—which leads to my sudden remembrance of Aging and the Elderly, a biology course that balanced its textbook with obligatory service work at a nursing home. I remember how volunteering deepened and nuanced the science I was learning, and how it was impossible to depersonalize the aging process when I was spending time with people going through it. Soon, we’re discussing our experiences with elderly relatives, how difficult it is to watch them deteriorate. As we pause for a sip, Alex says, “I know you’re drinking vermouth, but this is certainly the kind of deep conversation we would have had at Wes over bad beer. Isn’t this what you were sad to miss this weekend?” She’s right.

To finish the night, we move down the street to a tiny bar where a friend has a guest DJ gig. She’s playing plenty of music I love, but I’m waiting on a specific request. In the world outside Wesleyan, I sometimes forget that it’s necessary to dance your feelings, something I often did during college: at the Coming Out Day party at Psi U; at contra dances in World Music Hall; even in the late, great Mocon for B’nei Mitzvah parties. Finally, the song I’m waiting for, “Kids,” by MGMT, comes blasting over the loudspeakers. I am immediately transported to a particular night in WestCo during finals when, after several days of straight studying, our entire dorm let loose. The band was known as the Management back then, playing packed Eclectic shows and adored campus-wide but as-yet-unknown on the world stage. That night we shut off the hall lights and went dance crazy for five minutes—then, short of breath, returned to our rooms and our studies. I never imagined I’d dance to that same song halfway across the world.

I’m back in that packed, dark hallway doing the Boogie Club proud when I hear an American accent ask, “Do you know which band this is?” The man next to me introduces himself as Brett and says he’s from Connecticut. I volunteer that Alex and I went to school in Middletown. “There are some great bars there,” he says. “I always loved that one—what was it called?—with all the chairs on the walls.” Eli Cannon’s, in the middle of MGMT, in the middle of Madrid? I know I came here looking for Wesleyan, but this is uncanny.

The next morning, we head for Retiro Park, one of Madrid’s largest, looking to fulfill a particular on-campus craving. Throughout the park, edges and walkways create cozy spaces for sunning, playing games, or napping; but for the enormous pond filled with rowboats, we could easily be on Foss Hill on a spring day. We picnic in the dappled grass, splayed out on our stomachs eating Spanish ham, fruit, and chocolate. I close my eyes and imagine I can hear the bells of South College.

The rest of the weekend includes other such “Wesleyan” moments—a café’s homemade blueberry muffins that rival Red and Black’s; a fascinating (if slightly pretentious) art history discussion at the Thyssen Museum, but it turns out that the closest I’ll get to understanding true reunion in Madrid is back on that first afternoon after my arrival. Threading through traffic to meet Alex, Ander and I were interrupted in crossing a street by a brass band, blaring solemn religious songs and followed by a statue of Maria bedecked with lilies and roses. Behind her, a sea of middle-aged people in smart suits and dresses processed slowly. Ander asked a passerby if she knew what was happening. They’re alumni of a local school, he was told, and they get together every year to honor their saint.

I’ve decided that that’s what this weekend in Middletown and Madrid is really about—coming together to honor something special, unique, even sacred. Beyond the common memories and experiences, Reunion celebrates a certain curiosity, intellectual freedom, and quirkiness that don’t live anywhere in particular but that make Wesleyan and its people so special. I may have had to miss out on the campus celebration this time, but I am reminded that I still have that more important stuff with me. This other part of Reunion, which helps you get back in touch with the person you once were and with a certain way to think and feel and live, is always within reach— even 5,000 miles away.