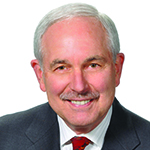 “My mother worked in the New Hampshire court system in the 1950s,” he explained. “She would come home and tell me about grand juries interrogating local citizens about their political activities.” Oleskey also watched the dramatic Army-McCarthy hearings on television: “From the age of 13, I wanted to be a trial lawyer.”

After high school, “by virtue of a generous scholarship,” Oleskey was able to enroll at Wesleyan. He noted, “There was a lot of social ferment—especially about civil rights—on campus and in Middletown.” He joined EQV (Esse quam videri: To be, not to seem), a renamed fraternity that had broken away in the late 1950s from a national that had refused to accept black or Jewish members. He found the small, intense, writing-heavy classes of his CSS (College of Social Studies) major, “great training for a trial lawyer.”

Oleskey’s first job out of NYU Law School was at Hale and Dorr (later, WilmerHale), which encouraged its attorneys to pursue pro bono work. At 29, Oleskey appeared before the U.S. Supreme Court testing the Massachusetts employees’ loyalty oath. He has continued his dedication to legal work for the public good and has maintained close relationships with Wesleyan. In 2005 he helped spearhead an EQV initiative to fund annual student summer internships related to social, political, or educational interests.

Anticipating his 50th Reunion, Oleskey wanted to assure “a larger impact.” He made a bequest intention to Wesleyan and also created a Charitable Remainder Unitrust (CRUT), which will provide supplementary income for his wife, Judith, and himself, while conferring tax benefits. These two planned gifts will fund an endowed internship in public service toward social and political change that will exist in perpetuity.

Steve Oleskey’s priorities have not changed; neither, he noted, have Wesleyan’s. “The students are even more socially conscious,” he said. “I’m even prouder of Wesleyan today than 50 years ago.”(See more at thisiswhy.wesleyan.edu)

Making it Easy to be Green: Susan Hunt Stevens ’92 wants to help you live green in your home