“Circular 14: The Apotheosis of Aristides,” a new dramatic oratorio composed by Neely Bruce, the John Spencer Camp Professor of Music, had its world premiere Jan. 23 at the American Jewish University in Los Angeles.

The piece tells the story of Aristides de Sousa Mendes, a diplomat and little-known Portuguese hero to many thousands of Jews during World War II. In June 1940, nearly 120,000 refugees fleeing from Nazi persecution amassed down the road from the Portuguese consulate in Bordeaux, France. Though Portuguese dictator António de Oliveira Salazar issued a vehement directive to deny safe haven to the refugees, Sousa Mendes still issued more than 30,000 visas in a matter of months. The article likens him to Oskar Schindler, the factory owner famous for saving the lives of more than 1,000 Jews during the Holocaust. In contrast, Sousa Mendes’s “contribution to history hasn’t received the same recognition mainly because Salazar took great pains to bury his story,” Bruce says.

In a preview, The Los Angeles Times noted:

“After Sousa Mendes’ actions were discovered, his case went to the Supreme Court of Portugal, where he was essentially given a slap on the wrist. The punishment wasn’t severe enough for Salazar, so the dictator had Sousa Mendes stripped of all diplomatic privileges as well as his license to practice law. When Sousa Mendes married his second wife, Andrée Cibial, the couple were not allowed to marry in Portugal. Family members found it hard to secure employment.”

Sousa Mendes died in poverty in 1954, and he was buried in a wooden box in the cemetery of Franciscan monks.

It’s a beautiful yet tragic tale, filled with larger-than-life characters—all the hallmarks of great opera, Bruce says, adding that the piece has been in the works for more than five years and that he wrote the libretto himself.

“I wasn’t writing a fairy-tale opera. I was writing an opera about real events, so I wanted to be as accurate as possible,” says Bruce, who has often visited political issues in his compositions and once set the Bill of Rights to music. 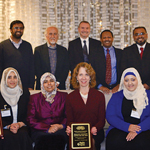