In this historic season, the Wesleyan Men’s Lacrosse team won the NESCAC and Little Three Championships, capping it off by reaching the NCAA Semifinals. Here, Cardinal All- American midfielder Taylor Ghesquiere ’18 celebrates after a goal during the NCAA Quarterfinal game against No. 3 Bates College at Jackson Field. Wesleyan won a 14-13 thriller. The team finished the season ranked No. 4 in the country with a 20-2 record. 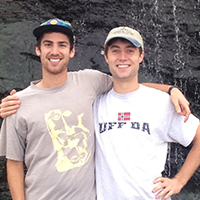 GIFTS FOR THE COLLEGE OF THE ENVIRONMENT