Editor’s Note: The poet Richard Wilbur, a former professor of English at Wesleyan (1957-77), died in October at the age of 96. The following tribute was composed by Larry D. Carver ‘66 on the occasion of Mr. Carver’s 50th Reunion last year, in honor of “this remarkable poet, teacher, human being.” A memorial celebrating Mr. Wilbur’s life and work is being planned on campus in the spring.

It was as a sophomore at Palmer High School in Colorado Springs, Colorado, that I first encountered the poetry of Richard Wilbur. The literature anthology we were reading had on one page a photograph of the poet, sauntering through a fruit market in Middletown, Connecticut, tossing an orange in the air, and on the facing page, his poem, “The Juggler,” to this day a favorite of mine, Mr. Wilbur being one of those, to paraphrase the poem’s last line, who has won and continues to win over “the world’s weight.” Five years later, in what I still consider a mysterious act of grace, I was privileged to be taking a class on twentieth-century American poetry at Wesleyan University with Professor Richard Wilbur. In my senior year I took his class on the poetry of Milton.

In the recent Class Notes for the Class of 1967, now retired Professor Spanish and Portuguese Dave Garrison writes: “I wish like everything I had taken a class with Richard Wilbur. Here was one of the most famous poets in America and I never signed up to work with him. A great opportunity lost.” It’s a lament I often hear, and I, too, wish that every student at Wesleyan during those twenty years that Mr. Wilbur graced our campus had taken a class, or two, or three with this remarkable poet, this remarkable human being.

To be sure, I don’t think many of us, aside from Larry Duberstein, knew at the time much about Richard Wilbur, that in his translation of Molière’s The Misanthrope in 1955 he was on his way to becoming one of his generation’s most gifted translators; that in 1956 he was collaborating with Lillian Hellman and Leonard Bernstein on what would become the inimitable, much acclaimed Candide: A Comic Operetta; that Things of This World, which includes the joyous, much anthologized, “Love Calls Us to the Things of This World,” was in 1957 awarded the National Book Award and the Pulitzer Prize for Poetry; that in 1959 he helped found the hugely influential Wesleyan University Press poetry series; or that the year before we arrived on campus he had published Advice to a Prophet, the title poem being as gut wrenching today as it was then. Being in his class we did know, however, that we were in the presence of someone special.

As with his poetry, a class with Richard Wilbur was laced with wit, elegance, massive erudition, and new perspectives. Through poetry he got us to see, to really see, the “things of this world.”  At the end of his poem, “Mayflies,” the speaker tells us:

Watching those lifelong dancers of a day

As night closed in, I felt myself alone

In a life too much my own,

More mortal in my separateness than they—

Unless, I thought, I had been called to be

Not fly or star

But one whose task is joyfully to see….

Mr. Wilbur wanted us to see, to see joyfully. Being one of those who plundered poetry for simple messages, I didn’t get it and often we argued, memorably for me over a Wallace Stevens’s poem, Mr. Wilbur pointing out that my view of poetry was remarkably “instrumental.” One day, however, the penny dropped, the poem being William Carlos Williams’s “To A Poor Old Woman,” which opens:

munching a plum on

the street a paper bag

of them in her hand

They taste good to her

They taste good to

As Mr. Wilbur read the poem, I understood, felt, no supporting idea needed, that those plums really do taste good to her, and my taste and understanding of poetry was forever changed—for the better.

That voice. His class would probably not have been as instructive, certainly not as memorable, had Mr. Wilbur not read, often reciting, so often to us. I still vividly remember that after reading “Lycidas” to us, he had tears in his eyes, telling us that we were in the presence of the greatest short poem in the English language. His voice was also our entrance into beginning to understand how and why poets choose the forms they do, how the form and shape of a poem helps to stress its tone and meaning. It helped that he required us to memorize, the ending of “Lycidas,” beginning with the incomparable, “Look homeward, angel, now…,” still with me after all these years.  He thought that Tennyson of all the poets writing in English had the finest ear, quoting from “Mariana” the line, “The blue fly sung in the pane….”

Under Mr. Wilbur’s mentorship we also came to understand the importance of the tradition, Mr. Wilbur seemingly having at his command all of English and American poetry, French literature, the Bible, and the classical authors, particularly Dante. In his words “It is fatal for a writer to have one hero only; submitting to a single model, admiring but one syntax and lexicon, means that you will say what you do not mean, and that you will never find the right words for what you do mean. A commanding imagination, as many have said before me, steals not from one writer, but selectively from all of writers, taking whatever will help in the articulation of its own sense of things.” In the classroom Mr. Wilbur’s commanding imagination was always at work, often providing stunning insights, one particularly staying with me. We were discussing lines 5-13 of Frost’s “Birches”:

Often you must have seen them,

As the breeze rises, and turn many-colored

As the stir cracks and crazes their enamel.

Shattering and avalanching on the snow-crust—

Such heaps of broken glass to sweep away

You’d think the inner dome of heaven had fallen.”

The passage sends us back, Mr. Wilbur suggested, to Shelley’s “Adonais” and the famous lines:

The One remains, the many change and pass;

Stains the white radiance of Eternity,

Until Death tramples it to fragments.

The discussion was long and lively; it has, as with all great classes, never stopped.

I enjoyed visits to his dimly lit office. Mr. Wilbur, always generous, would write on my behalf for the Rhodes Scholarship (Thanks to his letter, I at least got an interview). One memorable evening at Professor Joseph Reed’s house a group of us, led by Richie Zweigenhaft ’67, squared off against Mr. Wilbur and other faculty members in charades. The faculty showed up in tuxedos; we lost. On my desk are various signed copies of his work along with a postcard from “Wilbur/Cummington, Mass,” dated “23 December 1976,” which begins: “Dear Larry Carver, Amidst the ‘supreme madness,’ as Poe would say, of the holiday season, I can’t remember whether I have thanked you or Tom Whitbread for the first issue of Thicket.” In 1992 I invited him to give a reading at U.T. Austin, which he did to a large, appreciative audience.

Mr. Wilbur and his poetry have been and are for me a source of inspiration. I am drawn particularly to the craft and wit and to the theme of celebration in his poetry, of the power of seeing rightly, of being able to make our world, of the sense of grace. Mr. Wilbur told an interviewer from The Paris Review: “I feel that the universe is full of glorious energy…that the energy tends to take pattern and shape, and that the ultimate character of things is comely and good,” a statement that captures so well his work. At the age of 90, Mr. Wilbur published a new book, Anteroom New Poems and Translations. I gave a copy to the professor who directed my thesis in graduate school, and he responded in part: “First, many sincere thanks for the Wilbur book. He is as astute and gifted at the age of 90 as he always was. He manages to hit me in the emotional solar plexus….I hope he does you as well.”  He does, and I hope we will see more from Mr. Wilbur who this year turned 95.

Let me close with Mr. Wilbur’s poem, “A Black Birch In Winter,” which reminds me of us now celebrating our 50th Reunion.

You might not know this old tree by its bark,

Which once was striate, smooth, and glossy-dark,

So deep now are the rifts that separate

Its roughened surface into flake and plate.

Than of mosaic columns in a church

Or the trenched features of an agèd man.

Still, do not be too much persuaded by

These knotty furrows and these tesserae

To think of patterns made from outside in

Or finished wisdom in a shriveled skin.

And this is all their wisdom and their art—

To grow, stretch, crack, and not yet come apart. 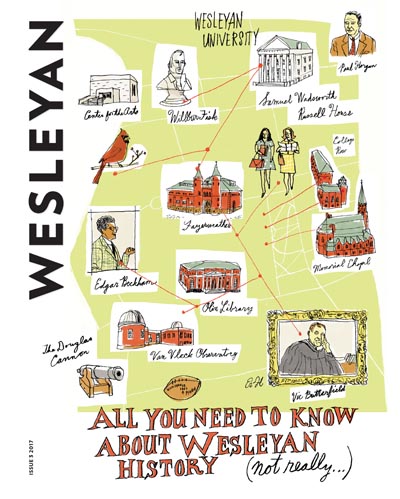 EDITOR’S NOTE: CHOICES IN FOOD AND IN LIFE