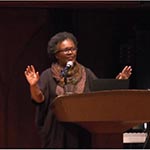 For this year’s First Year Matters program, incoming new students read Claudia Rankine’s Citizen: An American Lyric during the summer before their arrival on campus.

Rankine, a noted poet and author, had been on campus for Commencement 2017, when she received an honorary degree and addressed the graduating class.

On Sept. 1, Rankine was back at Wesleyan to address the Class of 2021, offering insights into the development of the book. She also entered into a discussion with first-year students, taking questions from the audience, who gave her snaps of approval throughout her talk and a standing ovation at the end.

Kevin Butler, assistant dean of students, who spearheaded this year’s program, noted that the selection committee had chosen Citizen for a number of reasons.

“It is extremely powerful and has thought-provoking passages,” he said. “And there are very few speakers I’ve seen who have the certain style, voice quality, and tone that is engaging and comfortable—even when the questions and answers are difficult,” he added.

In Memorial Chapel that Friday afternoon, Rankine spoke about her choice of images in Citizen and explained her use of the second-person pronoun “you” in addressing the reader as both intimate and as a device that placed each of her readers within the scene she described. Projecting the images she had chosen for the book onto a screen behind her, she noted, “I think visual artists have been doing the work of addressing the effects inside racism.

“A lot of language-based people have been talking about the history. Visual artists have been actually inside the job of trying to make apparent the feeling of it. You can also say musicians do that, too, somebody like Coltrane,” she said.

“When I went to work on Citizen, I was really interested in, How do you make a text about this thing of accumulating the day-to-dayness of what it is like to experience these encounters [microaggressions] over and over and over again? I felt, for me, it was really about seeing.… Using the visuals in this book was crucial to the project itself. For me, it was bringing language to meet these visuals.”

As she left the podium, a group of students gathered around her with follow-up comments before proceeding to their small discussion groups, facilitated by professors and administrators.

University Professor of Letters and Chair of the College of Letters Kari Weil, who served as a facilitator, noted that a majority of student responses she had read indicated “that they believed Rankine’s writing would inspire them to do what they could to address prejudice on campus during their time at Wes.”

Butler is eager to build on this. “Wesleyan is a place where we can remind ourselves that everyone should be treated equally and fairly.”