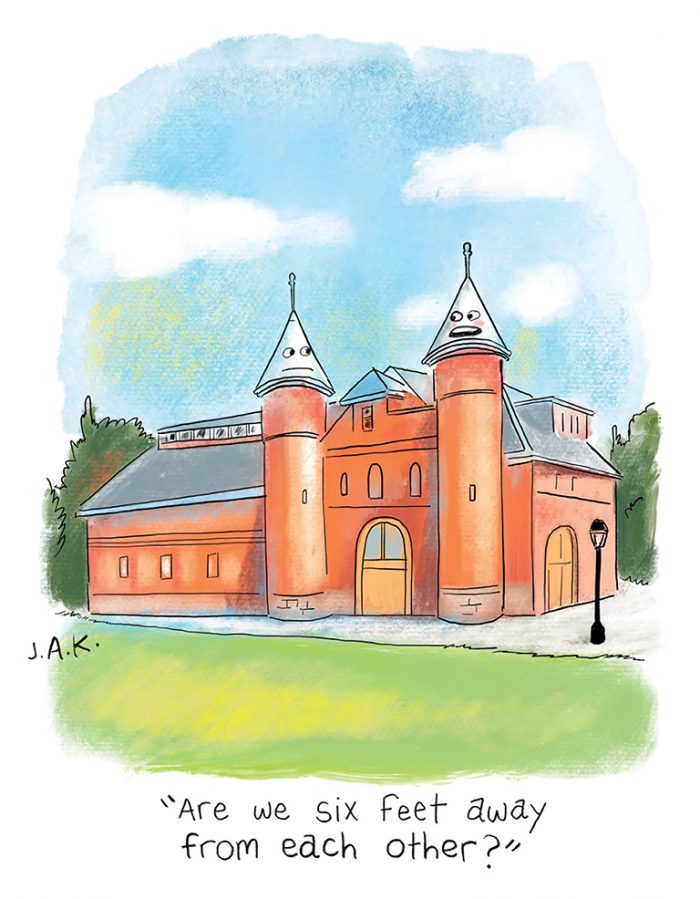 Jason Adam Katzenstein ’13—whose artwork appears throughout this issue—has been publishing his insightful, offbeat cartoons in The New Yorker since 2014.

Trenchant satire, silly setups, wry one-liners—it’s all personal for cartoonist Jason Adam Katzenstein ’13. “I realized pretty early on that all of my cartoons are autobiographical in some way,” he said.

Now the New Yorker cartoonist is opening up in a more explicit manner. With his graphic memoir Everything Is an Emergency: An OCD Story in Words and Pictures (Harper Perennial, 2020), Katzenstein shares his lifelong relationship with OCD, from the development of his first, seemingly harmless obsession as a child to his more debilitating experiences later, and his progress in managing the disorder as an adult. His book also provides a glimpse into how he launched his career.

An English major and now also a visiting professor at Wesleyan, Katzenstein teaches a course called Writing and Drawing Comics. His students learn to tell stories with both words and images; for their final assignment, they must produce a long-form comic between five and 20 pages long.

“I’m constantly floored with the quality of work produced by my students, some of whom have gone on to do this seriously as a career,” he said. Former students include New Yorker cartoonists Eleanor Black ’17 and Kaitlin Chan ’17, with Wes alumnae Sofia Warren ’13 and Emily Bernstein ’14 also among the ranks of New Yorker cartoonists.

He recently shared more about his book, his career, and how his class coped with distance learning during the spring. What was the biggest challenge in writing about and illustrating your life and your OCD?

Jason Adam Katzenstein: The biggest challenge was beginning to untangle how I felt about the relationship between my creativity and my anxiety. That was a chapter that I kept returning to because it was stuff that I hadn’t really worked through before.

What do you hope readers take away from Everything Is an Emergency?

The book deals with a difficult and serious topic, yet there are many moments of levity and humor.

JAK: Humor has always been the way I’ve been attracted to telling stories. It’s also the most sincere expression of my own tone that I’ve been able to do, because I tend to write for other people or draw for other people, be it for The New Yorker or Image Comics or collaborations. In making this book for myself, I got to take a deep breath and make the book that feels truest to how I work alone.

How did you start drawing cartoons for The New Yorker?

JAK: There’s a Wesleyan connection, and this is a “Kevin Bacon” story: One of my best friends from Wesleyan, one of his best friends from high school was roommates with the assistant cartoon editor at The New Yorker. He ended up seeing my work. I pitched for a few months and finally they bought the last cartoon I ever expected them to buy.

Where do you get your inspiration for cartoons?

JAK: They have to come from somewhere true. It’s just about taking things that the artist notices about the world and creating a tension between that and something that we all are quick to recognize. How I might feel about getting a package shipped to me, combined with mice in a maze. Or going to the doctor’s office, but when you’re Superman.

As a visiting faculty member during the Spring 2020 semester, how were you and your class impacted by the transition to distance learning?

JAK: After we moved over to Zoom, I was sad that I couldn’t be in the room with everybody. One of the bright sides was that my students would have questions like, “What’s it like to work at Marvel?”—which I don’t have the answer to. But Dana Schwartz, who wrote The White Man’s Guide to White Male Writers of the Western Canon [(Harper Perennial, 2019), a book Katzenstein illustrated], writes comics for Marvel. I asked her to be a guest in our class, and even though she lives in L.A., we could all Zoom in together.

I also invited some New Yorker cartoonists, and we had a lot of other visiting guests. That part of the semester felt very rewarding. And in fact, when I’m back in the classroom, I want to implement some of that into the class, because it was really a special treat to be able to bring in professionals from all over the country.

Images courtesy of Jason Adam Katzenstein and The New Yorker