Though Carol Wood knew she kicked butt at “Bust a Move Millennium,” she never thought she’d catch the attention of the national media. But there she was in a story in the Dec. 22, New York Times.

“It was during the holidays and I told them I was on the road,” Wood, a professor of mathematics, says. “So they sent a photographer to the Miami airport. They got us both playing. I think it was a nice picture.”

“Both” being Wood and her 26–year–old daughter, Emily Coven, who were playing on their Game Boys.

For the unitiated, a Game Boy is roughly the size of a small pocket camera. Interchangeable cartridges supply the games, while batteries provide the power. The user manipulates finger– tip buttons to control the action.

While Wood likes puzzle–oriented games such as “Bust a Move Millennium,” her daughter prefers golf games, “Rayman” or the Game Boy incarnation of “Super Mario.” Though both women are able players, the Times wasn’t reporting on their skills but rather that they represent a growing trend: women and girls who play Game Boys.

The article grew out of Coven’s conversation with an acquaintance, Julian Barnes, the Times reporter who wrote the story. Barnes was talking about some of the topics he had been assigned to write about in the next few weeks and mentioned the phenomenon that increasing numbers of women are playing with Game Boys. Coven excitedly told Barnes that she and her mother were avid players and had in fact just bought new color models.

They aren’t alone. According to Barnes’s article, which featured Wood, Coven, and several other women, of the 110 million Game Boys sold by Nintendo in the United States since 1989, 36 percent are used by women and girls, and adult women are the toy’s fastest growing new market. Wood found this interesting:

“It is simply a diversion for me, something I’ll do, mostly when I’m traveling, and I’m too tired to read or do work. For example, several years ago, Emily and I rode in the back seat from Connecticut to Virginia. That’s about an eight–hour drive. We played Game Boy almost the whole way. Emily and I got new color ones this November for the drive from D.C. to Virginia.”

The driver on these long trips to visit family, Wood’s husband Ethan Coven, professor of mathematics, never plays Game Boy. Wood adds that the Game Boy is convenient. The bright purple unit fits nicely in her purse without taking up much space.

She comes from a family that has a long–standing love of games, especially cards and traditional board games. One year a former student gave her daughters, then still very young, a Nintendo game with a “Super Mario” game cartridge. Wood started playing, too, and enjoyed it.

“I remember waking the girls up all excited in the middle of the night because I figured out how to get down the cactus pipes,” she says, laughing.

When asked if there is a connection between her lifelong love of mathematics and what she gets out of her Game Boy, Wood shrugs.

“Well, there is certainly the satisfaction of solving something with both, but I think that’s about it,” she says. “With math you learn something, with the Game Boy you’re entertained. I know some people get obsessed with these games, but it’s not an obsession thing for me. In fact, I probably won’t pick up my Game Boy again until the next time I have to take a long trip.”

This doesn’t mean playing Game Boy is without its advantages, however.

“My other daughter, Martha, laughs that she’s the only person she knows in her generation who has a mother and an aunt who have saved the Mushroom Princess.”

Ed Stein ’60 and Paula Gamache ’72 Wesleyan: Across and Down 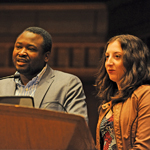