Winston has been translating professionally for more than 30 years. While growing up she puzzled over problems in translation at the dinner table with her parents, Richard and Clara Winston, also professional translators, whose work includes Jung’s Memories, Dreams and Reflections. As a graduate student, Winston translated her first fulllength work from German into English for the University of Chicago Press, a study of Thomas Mann’s Doctor Faustus. Since then, she has translated fiction, biographies, essay collections, and volumes of literary criticism, psychology, and history. Her translation of Too Far Afield, published in fall 2000, took two and a half years to complete. The Goethe Institute of Chicago recently awarded her the 2001 Helen and Kurt Wolff Translation Prize for this work. Winston is now working on her 23rd book, a study of Johann Sebastian Bach.

Q: How were you approached to translate Too Far Afield?

KW: Before Grass finished the novel in 1995, his longtime translator into English, Ralph Manheim, had died. Together with my colleague Arthur S. Wensinger [professor of German emeritus], I had translated Two States One Nation, a book of Grass’s essays and speeches published to mark Germany’s unification on Oct. 3, 1990. So Grass’s editor at Harcourt put my name forward. It took a long time for Grass and his advisers to choose a new translator. He was nervous about placing his text in someone else’s hands after working with Manheim for almost 25 years.

Q: In 1995, you attended a translators’ meeting with Grass in Göttingen, Germany. What was that like?

KW: Grass is one of a very few writers whose novels are immediately translated into 15 or more languages as soon as they appear in German. The meeting was attended by 10 of his translators, along with Grass’s editors and other staff members from his publishing house. We spent five days working our way through the novel, almost page by page, with Grass as our guide. Members of the international press (Le Figaro, BBC, etc.) also joined us: the translators’ conference was news, the more so because Grass was rumored to be on the list of possible Nobel Prize winners.

We would start in the morning and work until about 1 p.m., then break for lunch and resume around 3 p.m. By 7 p.m. we would knock off for the day and all go to dinner with Grass, unless he had a reading engagement, in which case he would join us later. Grass’s energy proved astonishing; he could talk (and drink) most of his translators under the table. Equally astonishing were his patience and generosity when it came to explaining the literary, historical, and private allusions, the unusual expressions, the puns, and the real and fake literary quotations—all the things his translators might need help with.

The translators received a wealth of materials prepared by Daniela Hermes, a young Grass scholar. These materials included lists of all the real persons mentioned in the novel; maps of Berlin and other pertinent locations; a section-by-section synopsis of the book; a chronology of historical events referred to in the novel; photographs of buildings and statues; and more.

Q: What challenges and difficulties did you encounter as you were translating Too Far Afield?

KW: The novel posed numerous challenges, starting with the German title, Ein weites Feld, a quotation from a character in Theodor Fontane’s novel Effi Briest (1894). This man avoids unpleasant topics by remarking that they lead too far afield. It was important to keep the topographical reference in the title, since Grass was writing about the two Germanys and their political and social cultures. The idiomatic quality of the phrase also had to be captured, the notion of avoidance, because Grass wanted to confront his fellow West Germans with the implications of simply taking over East Germany without regard for the way it had developed in the course of 45 years of separation.

The agency created to conduct the privatization of publicly owned property in the former East Germany, the Treuhand, occupies a central position in the novel. The term literally suggests a trusty hand, and Grass puns mercilessly on the greedy hands snatching not only for East Germany’s public holdings but also for its people’s very soul. I eventually came up with the name “Handover Trust” for this agency, the first part of the name inspired by one of William Safire’s “On Language” columns, in which he discussed the range of terms being used for Britain’s conveyance of Hong Kong to China.

More general difficulties had to do with the use of dialect by several characters—dialect is notorious for being untranslatable; the elaborate puns; the repetitions of and variations on certain terms and phrases that ran through the book (the computer helped me keep track); and the frequent changes in tone and register.

Q. Wasn’t it particularly hard to translate such a long book on your own?

KW: I received invaluable help from a brilliant former student, Christian Thorne-Miano ’95, who knows Grass’s work inside out. Christian read my rough drafts from start to finish, provided unfailingly accurate and appropriate criticism, and suggested alternatives, many of which I ended up adopting. Without his assistance, the translation would not have turned out nearly as well as it did.

Q: Could you say a little more about the novel?

KW: The main character is a man who goes by the nickname Fonty, because he was born 100 years to the day after the 19th–century novelist, Theodor Fontane, in the writer’s hometown, no less, and has stylized his life as a continuation of Fontane’s, down to the name of the woman he married and the names of his children. This conceit allows Grass to create a parallel between Fontane’s era, which saw the first unification of Germany under Prussia, and our own time. At the beginning of the novel, the Berlin Wall has just fallen, and the story continues until shortly after unification.

The Fontane references introduce a pervasive subtext in the novel: the often ambiguous role the writer plays in society. I suspect Grass was using the book for exploring the question of whether his own creative work has helped or hindered the causes he has espoused.

Q: Why was Too Far Afield attacked by critics in the German media?

KW: Grass’s publisher had rolled out the book with tremendous fanfare. No sooner had it appeared than Germany’s “literary pope,” the influential (and cantankerous) critic Marcel Reich-Ranicki, denounced it on his television show and in the pages of Der Spiegel, the leading news magazine. I have a poster in my office showing the cover Spiegel ran, with a composite photo of Reich-Ranicki literally tearing Grass’s book apart. Hundreds of reviews and commentaries followed, many of them quite savage in their attacks on Grass’s perceived political stance, but also on the literary quality of the book.

I think the crux of the matter was that Grass had little good to say about the way unification had been implemented, and some pretty harsh words for Helmut Kohl and the West Germans, with their presumption that they were superior in all respects to the “brothers and sisters” in the East and were doing them an immense favor by putting East Germany out of its misery. Readers in the former East Germany liked the book much better, and time has borne out some of Grass’s predictions about how difficult it would be to bring the two countries together in an equitable fashion. As the writer Peter Schneider has put it, many Germans today still have “the Wall in their heads.”

Q: Do you agree with the negative comments from critics about the book’s literary quality?

KW: Perhaps Grass has never matched his achievement with The Tin Drum, published in Germany in 1959. Certainly he does not make it easy for the reader of Too Far Afield; the book is immensely complex in its structure, its ideas, its intertextual and historical allusions. But it is also a wonderful book, one that reveals its treasures—and its humor—only upon slow and careful reading and rereading.

Q: How would you define a good translator?

KW: Obviously a literary translator needs to know the source language and culture very, very well and have native command of the target language. Probably the most important characteristic of a translator is a feel for language, for the way it works—intellectually, emotionally, viscerally. Fine translation is an art, and as such entails a good measure of intuition. There are hundreds of books and articles on the theory of translation, but not one of them offers a workable prescription for doing a brilliant translation; at most they can enhance one’s awareness of the factors involved.

Q: What are some examples of your favorite translations?

KW:Probably my favorite translation is the King James Version of the Bible. More recent, supposedly more accurate, versions fail to capture the poetic qualities of the original texts. I still find Richmond Lattimore’s translation of the Iliad unequaled. Marc Blitzstein did a superb translation/adaptation of Brecht and Weill’s Threepenny Opera. Those are just a few.

Q: What do you emphasize in teaching translation at Wesleyan?

KW: My teaching of translation has all been done in tutorials, mostly with seniors working on translations for honors. I emphasize understanding the original text; for students who may not have started learning German until they came to Wesleyan, that isn’t always easy. Knowing how to identify idioms is crucial. Next, I stress the importance of recognizing the stylistic features of the text—sound, rhythm, levels of diction. Finally, I insist that the finished translation reads well in English. What I hope the students will take away from the process is the rudiments of a skill they can use later, and an appreciation for the infinite subtleties of language. 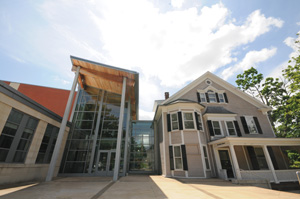 Wesleyan Creates New College of Film and the Moving Image

How to Have a Difficult Talk