The Office of War Information admonished WWII filmmakers not to mislead young people with propaganda.

In the days immediately following September 11, the words “Like Pearl Harbor…” seemed to be on everyone’s lips, as last spring’s highly publicized film had brought that historical event to the forefront. Soon, though, the differences between the movie, World War II, and the country’s new crisis became evident. The striking similarities between actual events and recent action films, however, left most with a question: How will Hollywood adapt its films to fit this changed mood in our country? For a historical and intellectual perspective on the industry during war, Wesleyan spoke to Corwin-Fuller Professor of Film Studies and Curator of the Cinema Archives Jeanine Basinger. She is the author of Anatomy of a Genre: World War II Combat Films, and after the September attacks was sought out by numerous national publications.

Q: Are the movies produced during World War II indicative of what we’ll be seeing in our theaters in the upcoming year when we are at war?

A: Since September 11, many people have asked me about what types of movies followed the event of Pearl Harbor. But the World Trade Center attack is not the same thing. It is terrorism, with an unknown enemy hiding from us, not an attack of war by a specific foreign nation. We’re in a different situation.

Q: What are the trends in current movies, television, and video rentals?

A: It is historical fact that people always turn to entertainment more in times of stress. More parlor games are sold; more playing cards and books are sold; more people go out to the movies and watch TV and sports at home. But it’s hard to predict film trends because production has a long advance period. So far, now nearly two months past September 11, we can note that the reality shows on TV are being cancelled, but the old forms of comedy are popular. People are responding to new TV shows that have a family unit in them, something familiar and reassuring. And Black Hawk Down, a brutal film, is both a critical and commercial hit.

To help me answer all the questions from interviewers, I did some research on video rentals after September 11th. Stores around the country said nothing had changed. People were still renting Die Hard and Towering Inferno and movies with images of exploding buildings.

Q: Many people, referring to the news images of September 11, said, “It was like a movie.” How would you respond?

Q: How did the film industry react to Pearl Harbor?

A: You have to remember that when World War II broke out, we were the only major power without a propaganda agency. Pearl Harbor freed President Roosevelt to deal with that. He appointed Lowell Mellett to oversee the government’s war-related films, and Mellett established a liaison with Hollywood to be sure the studios would implement the overall war effort. The ultimate organization, The Office of War Information, had no censorship power over Hollywood, but the business cooperated. The OWI asked filmmakers to consider a list of seven questions for all films … and the most interesting one today is the famous “number seven”: “Does the picture tell the truth or will the young people of today have reason to say they were misled by propaganda?”

By the way, Frank Capra became the head of OWI as “Colonel Frank Capra.” We have all his papers regarding that important mission right here at Wesleyan in our Archives. Capra produced the famous “propaganda” series called Why We Fight. Originally, these films were to be shown only to soldiers to prepare them for their jobs in the war. Roosevelt, after seeing them, decided the entire American population should have the chance to see them, as their quality was excellent. Capra and all the Hollywood personnel who worked on these films did so as military men, however, not as civilians.

Q: Is there a similar informative role the film industry might be asked to play today?

A: Again, remember, during WWII, the American public could not see images of war quickly. To see the war as it really looked, they had magazines and newspaper photos, not moving images, and they had to wait for newsreel coverage, usually nearly ten days old. And they had to leave home and go out to the movies. Today, 24 hours a day, seven days a week, you can turn on your TV for immediate “as it happens” coverage. Film will presumably play a larger role in created, or narrative, images—storytelling—as a result.

I’d like to say something here. People frequently act as if Hollywood is a foreign country…which, I suppose, in a way it is. However, the people who live and work there are citizens just like us. They vote, they are parents, they share our feelings of civic responsibility. In fact, Hollywood has an honorable history in being the first to entertain troops, to raise money for war bonds, to make the kinds of sacrifices people are asked to make in wartime. Hollywood really rose to the occasion during WWII.

Q: What were the most popular films during WWII?

A: Approximately 30 percent of the movies released then were either combat films or directly about the war. The other 70 percent were what are often called “escapist” films. But that’s deceptive. For instance, let’s take Tarzan Triumphs made in 1943, the depths of the war. In this movie, Tarzan triumphs all right … but over the Nazis. Nazi paratroopers drop into the jungle!

However “escapist” the movies were, they were often directly connected to war. There was no real escaping from the war. People going to the movies and making the movies had sons, husbands, brothers, friends, sisters, aunts, uncles, in combat or in the war effort. You couldn’t suggest to such an audience that the war wasn’t happening. It would be insulting. What people wanted from the movies were two things: a better understanding of what was happening; and a little relief from war’s sadness, death, and pressure from time to time. Not escape. Relief. Those are two different things. As a result, you had comedies, musicals, period pieces, animations, that did not deal directly with war.

Q: Wasn’t it difficult for filmgoers to watch heroes die in combat films when real soldiers were dying?

A: Of course, but the audience knew that’s what could happen. Movies didn’t deny that the war was difficult and lives would be lost. Instead, they stressed the idea that our cause was just and that we were fighting honorably. People today imagine that all these films always said, “We will win. The hero will never die. There will be no sacrifice.” It’s not true. The hero of Story of GI Joe (Robert Mitchum) ends up very dead, his body slung over a mule like a sack of flour.

Q: How do these observations apply to the Vietnam War?

A: Vietnam is very different. During the Vietnam War itself, we had almost no movies set there, no Vietnam combat films. We didn’t want to go there, because we didn’t need to go there. We had actual combat footage every night on our TV sets. So during those years, other genres stood in for Vietnam, such as the Western. (My colleague, Richard Slotkin, is a genius on this topic and could tell you all about it.)

America produced a lot of very violent Westerns during Vietnam, in which groups such as Mexicans and Native Americans stood in for the Vietnamese. After the war was resolved, combat films set in Vietnam began to appear, but it has yet to become a really popular setting for combat films. World War II is our favorite setting for them. It will be interesting to see what happens now. Several Vietnam films are currently being prepared for release, but the majority of the war films in the works are set in World War II.

Q: How will comedy figure in the upcoming productions?

A: The first wave of interviewers wanted me to say that we’ll never smile again: no more comedy. In the second wave, it was just the opposite: will we ever again want anything except comedy? they asked. There’s an old saying about the film business: nobody knows anything. And it’s true. Who knows? No one. All we know is that we will want entertainment. We will want comedy and escape. Ultimately, however, we will want intelligent and mature stories about what happened on September 11, because that’s how it always happens historically. We want story-telling versions of disastrous events so people can relive them safely and try to understand them. 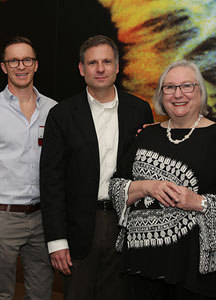 THE SHASHA SEMINAR ON THE ROAD: ALUMNI IN FILM