When considering a new business opportunity, most entrepreneurs think about location, client base, access to supplies, demographics, and marketing. But Adam Lachman ’03 was thinking only about the taste of ice cream.

“We were on the way home from Maine, where we have a vacation home, and we always stop halfway at Annabelle’s, a popular ice cream shop in Portsmouth, New Hampshire,” says Lachman, who is from West Hartford, Conn. “I started talking with the owner about the shop. The more we talked, the more interested I became.”

Lachman began to think about ice cream in Vinalhaven, an island 15 miles off the coast of Maine where his family vacations.

Those were entrepreneurial thoughts. He began scouting locations on Vinalhaven for a drop-in style shop with a few seats indoors and out. He found a small 15-by-8-foot storefront on the water about a quarter-mile from the ferry and the center of town. “The location was right on the main road. Everyone coming on or heading off the island would pass us.”

Suddenly, owning and running a summer business seemed viable to the then-17-year-old student. All he needed was venture capital. Luckily, he was able to borrow the $15,000 estimated startup cost from his father with the expectation that the loan would be paid back in two years.

“I thought those were pretty reasonable terms,” he recalls.

As it turned out, his assessment was much too pessimistic. He was able to pay back the money, in full, 35 days after starting his business.

Six years later Lachman has a string of successes attributable to a good product and an eager market. After all, serving gourmet ice cream to a community whose summer population exceeds 6,000 people seems like an easy winner. Then again, nothing is easy with a startup business. Lachman made his venture work with tenacity, intuition, and ability to adapt his business to his environment: a textbook execution of entrepreneurial skills. Except he never read any business textbooks.

A keen observer of his environment, he recognized early on that despite the annual summer population swell, the key to success would be support of the island’s year-round population.

“It’s the islanders who really make the businesses go. And there is a resentment factor if you’re perceived as someone who is just coming on the island to make some money for a few months and then disappear.”

He began appearing with free ice cream at the Thursday night baked bean supper, a popular community fundraiser at a local church. The ice cream quickly became a favorite, and Lachman was soon met with applause when he arrived at dinner.

He added gourmet Italian coffees and crepes to his store menu, drawing people in during the morning and at night. At the annual Fourth of July parade he used his brother’s ’64 Volkswagen Beetle as a parade float and handed out free minisamples of ice cream from the hood.

“By the second year, when we got to the center of town the whole parade stopped because we were mobbed by people and kids. They had to put us as the very last float.”

The Vinalhaven Ice Cream Shop, or “Annabelle’s” as it is often referred to by the locals (for the brand of ice cream Lachman stocks), had become a destination of habit. He was accepted into the tight-knit island community.

“We’d see regulars every day and night, coming down for coffee, coming by after dinner for a sundae or whatever. The shop also quickly became a favorite hangout for local kids in the 13- to 20-year-old range.”

Not content with this success, he started branching out. After people on the neighboring island of North Haven expressed interest, he opened a bigger shop there. Serving ice cream from late morning into the night, he also offered a lunchtime grill and evening pizza bar.

“I partnered with two friends from North Haven, plus my older brother, Jamie. I hired a close friend from Wesleyan, Tucker Reed ’02, as head chef (later as partner).” Over the last six years he has hired nearly a dozen Wesleyan students to work at his shops.

The North Haven location also started doing a profitable business, which led to an interesting request from a new patron.

“We were asked if we did catering. We didn’t at the time, but I talked to the person and found it was for a party of about 40 people. We decided to take the job, even though we’d never done anything like this. We thought, How hard could this be?”

Lachman and Reed pulled together some recipes, ordered the food, and went about preparing for the dinner. As the day arrived, however, he and his coworkers found that timing everything properly, maintaining service, and fixing the little problems that crop up as things unfold were major challenges. As if that weren’t enough, the party was thrown by some of the most prominent islanders and their guest of honor was Sigourney Weaver.

“It turned out to be the single most stressful night of my life. But somehow we pulled it off.”

Pulled it off so well, that in the next week he found himself with half a dozen requests to cater more parties. So a catering business was born as well.

“Once you build a reputation and prove what you can do, that confidence consumes you. That first night catering we went from a point of, ‘We don’t know if this is going to happen,’ to, ‘We are doing this and doing it well’.”

The stress of running three businesses without a break in two years eventually left him mentally and physically exhausted. He decided to take some time off from school. “I’m on the six-year plan,” he says, smiling. “But Wesleyan has been very accommodating. They’ve really worked with me to make continuing my education as smooth as possible.”

He has since pared his business activities and remains active as a student. He is a student representative to the Board of Trustees, a sociology major coordinator, and on the Ultimate Frisbee team. This year, after he receives his degree, he will be starting a new business venture with Bethany Caruso ’03, who had managed the store on Vinalhaven.

“I’m moving the original shop to a bigger location in the center of town and plan on operating it year round. This will be a full-blown coffeehouse.”

He is also investigating locations in Camden and Portland, Maine, for additional shops.

“I don’t know that I want to open and run ice cream caf&eaigu;s for the rest of my life,” he says, his face serious. But then he smiles. “Right now, though, it’s a lot of fun. I’m enjoying it.” 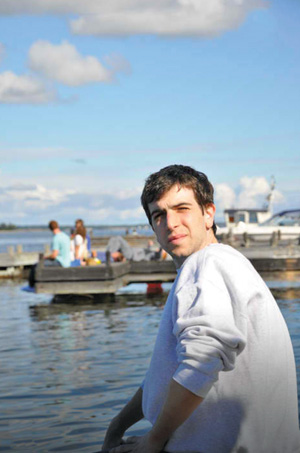