AS THE CROWD TRICKLES IN TO A TRENDY MANHATTAN NIGHT CLUB, Jahi Sundance Lake ’01, one of New York’s hottest young deejays, lugs two steel crates and a satchel stuffed with LPs up the stairs to the loft where he’ll perform for the next two hours.

Lake, who comes to work dressed in a football jersey, baggy pants, and sneakers, isn’t expecting any dancing.

“It’s a corporate crowd,” says Lake, whose hair reaches halfway down his back in curled dreadlocks. “They’ll be chillin’. This gives me more freedom.”

For Lake, it’s another night in a budding freelance career in the entertainment industry that began in the basement of his suburban home during high school in Montclair, N.J. It picked up speed at Wesleyan, where he was a fixture behind the turntable at countless parties and college-wide events with his college deejay partner, Semu Namakajo ’01.

Since graduation two years ago, Lake’s career has truly taken off. In 2002, he went on tours across the United States and Europe with R&B bassist Meshell N’degeocello, performing solo on his dual turntable system before the concerts and then joining the band to add his percussive inspirations.

This spring, he had a weekly gig at a New York club called Spread. He spent two weeks in Crete, spinning records at a posh Mediterranean vacation resort. Soon after his return, he embarked on a 17-week tour over the summer with Def Jam Records, the music industry’s pre-eminent hip-hop label. New York University recently appointed him an adjunct instructor.

When he’s not touring, Lake finds time to teach deejay technique and tour with the Scratch DJ Academy, the first school for deejays in downtown Manhattan. He also works in the recording studio as a producer for musicians making their own music.

“Every week, something new comes up,” says Lake, who has lived at home since graduation but hopes this summer’s tour will give him the financial boost to land an apartment of his own. “You have to be at the right place at the right time, that’s half of it. You could be the best deejay, but if you only play in your basement, nobody will hear you. You have to get out and socialize, and you’ll run into people who say, ‘I need a deejay.’ That’s how it works.”

At Lot 61 that cold wintry night in Manhattan, Lake is in his element, surveying the crowd from his deejay’s perch above the throng. Down below, sipping draft beer that costs $7 a glass, are a collection of Manhattan professionals in their 20s and 30s, including Jarrett Cobbs ’02, and Soraya Burtnett ’95, who’ve come to a midweek showcase of emerging young talent.

Sponsored by Chrysler, the event is a place to network, meet someone new, and keep up with the cutting edge of New York’s vibrant cultural scene. Tonight, the young professionals will hear Lake spin his eclectic selection of music, see a German clothes designer unveil her latest creations in an impromptu fashion show, and watch the preview of a filmmaker’s documentary on the links between Judaism and the Jamaican music called reggae.

If they take a close look at Chrysler’s promotional video playing on overhead screens, they’ll see that the lanky young man loading steel crates into the trunk of a PT Cruiser and driving it in style around Manhattan is none other than Lake, that night’s deejay.

As Lake figures out the complexities of the club’s sound system, he also checks the digital gadget clipped to his hip for a wireless e-mail message from a friend, updating him on what’s happening at the party down below.

Then he spins his first cut, a cacophonous recording of The World Saxophone Quartet, whose members include his father, Oliver Lake, the renowned saxophonist, composer, and poet. He pays homage to his jazz roots with a composition by legendary jazz bassist Charles Mingus, and he’s soon thumbing through his crates, putting on a blend of today’s smooth rhythm and blues and early ’70s funk as he warms up the crowd. By the end of his two-hour stint, Lake has hit his groove as the music builds to a climax with hard-edged rap, and he’s doing a dance of his own in the deejay’s loft.

Lake’s rise to the top comes as the deejay plays an increasingly larger role in popular music. The deejay has evolved from its origins in the 1940s, as the disc jockey who “rode” the records on the radio. By the ’60s and ’70s, the deejay had become part of the club scene, playing music for live audiences and using a mixer to provide a seamless transition from song to song.

Today’s deejay, however, does much more than select tunes to play. He or she operates from behind a two-turntable system and uses the vinyl recordings as sound that can be manipulated into something new.

These high-tech turntable systems allow the deejay to push or pull the record across the stylus, and switch the sound between both records, creating a percussive sound that’s at the core of the hip-hop music. In many rap groups, the deejay, not a band, provides the music.

Lake’s love affair with music began at home. The fifth of six children, he grew up in a household filled with sound, with Oliver Lake practicing his saxophones and Lake’s siblings playing various instruments. His name, Jahi, is the Swahili word for “dignity,” and his middle name, Sundance, honors the Native American heritage of his grandfather.

While in elementary school, he learned the piano, and later, the baritone saxophone, that oversized, deeply resonant reed instrument. His father thought he might pursue it as an adult. But then Lake, who was 14 at the time, saw the movie Juice, a coming-of-age movie from the 1990s whose hero was a deejay played by Omar Epps.

“When I saw that, I said, ‘I can do that, I want to be a DJ,'” he says. “So I got a little turntable setup in the basement of my house, started working at a record store, and it was just a natural progression from there.”

To gain a foothold in the entertainment business, he has also discovered his talents as a teacher and recording producer. This winter he produced for two of his father’s recording ensembles, the Oliver Lake Steel Quartet and the Oliver Lake Big Band. He also worked with N’degeocello on her latest recording.

“He is the ears for me when I’m trying to play,” says Oliver Lake. “I trust his ears. It’s just a little different to have my son telling me, ‘Hey Dad, you better do another take.'”

Lake’s musical background and desire to pass on his knowledge to others has made him one of the top teachers at the Scratch DJ Academy. The Academy was cofounded in 2002 in Manhattan by DJ legend Jay Mizell, known as Jam Master Jay, just months before his murder last fall.

Lake toured several college campuses last year with the Scratch DJ Academy on tours sponsored by Volkswagen and Lipton Brisk, teaching deejay technique to young adults hungering for instruction in an art that’s at the core of hip-hop music today. The tour with Def Jam Records this summer also came through Scratch.

“People love him,” says Scratch DJ Academy co-founder Rob Principe. “Jahi is creative, has a firm grasp of the concept, and can communicate the curriculum in a way that people understand.”

One January afternoon, Lake stands before 44 students, including two of Mizell’s children, who have come for instruction at Scratch DJ’s 6th-floor classroom on lower Broadway. A welter of sound fills the studio as Lake puts his students through exercises to teach rhythm and cueing techniques. He shows them how to “scratch” the vinyl with an extended arm, with their whole body moving.

Scratching is literally pushing and pulling the record while the stylus is in the record grooves. That produces the scratch sound. Today’s stylus doesn’t damage the vinyl like the ones used 30 years ago. Scratching can be done slowly or quickly, to produce different sounds and beats.

“We are going to personify ourselves as sound,” he says.

Scratch is at the forefront of the effort to classify deejays as musicians, giving them the respect within the industry and academic world Lake says they deserve. He’s committed to that effort, hoping that one day deejays will be eligible for the musicians’ union, with its mandated pay scales and benefits like health insurance. He also sees a day when college music departments will offer classes in the art form.

“All the real deejays want to be looked on as musicians because we make the music with our hands,” Lake says. “Right now, we are running the show, we are everywhere. The public, though, looks at us like juke boxes, and somehow less valuable than someone who plays the guitar. But it’s the same. We have our turntables. They’re our instrument.”

Lake has his turntable console on stage one night this winter at the BRIC Studio in Brooklyn in a concert series called “Possible Fireworks,” in which musicians who have never played together join for an evening of improvisation. No rehearsing is allowed before the performance. The quartet that night includes Lake on his turntable, his father on reeds, his brother, Gene, on drums, and a bass player.

While Lake and his brother had played in N’degeocello’s band, it’s the first time Lake has performed with all three family members on stage.

It’s an evening of exploration on the outer reaches of contemporary music. With his father leading the band on his saxophone and reading his poetry, Lake, bent over the turntable with his head bobbing, provides an engaging element to the quartet’s music. At one point, he pulls out a solo Oliver Lake recording and spins that in response to his father’s live solo. During another tune, he plays off his brother’s drumbeat, scratching a record in a way that brings another percussive element to the improvisation.

In yet another tune, Lake puts on recordings of speeches by Malcolm X and Stokely Carmichael, adding the spoken word to the unfolding jazz composition.

“I’m trying to connect with the crowd,” says Lake. “And when it works, you feel that you and the crowd are moving together.”

David McKay Wilson, a freelance writer in New York, studied improvisational dance at Wesleyan in the summer of 1985. 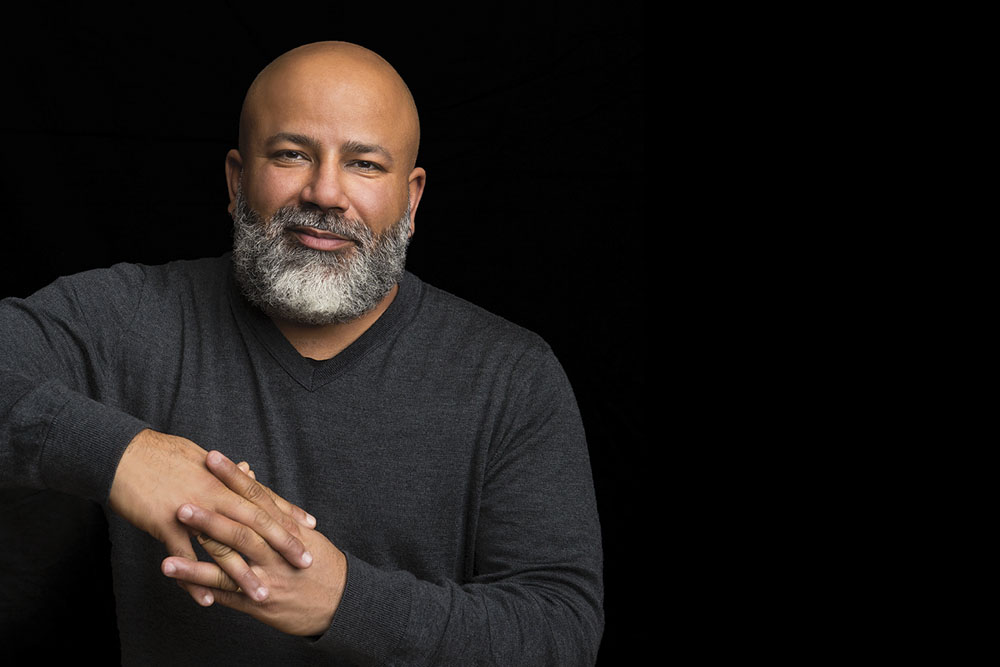