So you want to write a best-seller thriller and you want some tips.

If you are not among the 100 million or so readers who have purchased books by Dr. Robin Cook ’62, then, briefly, Coma was a runaway best seller turned movie that he wrote early in his career. It established this physician-writer as the creator of the medical thriller genre. It was not, however, his first book.

Cook told a Reunion and Commencement seminar audience that the origins of his writing career lie in his Wesleyan years. He pursued a science-oriented pre-med curriculum, but decided to write an honors thesis in an area in which he had taken no courses. His thesis adviser, a Harvard professor spending a sabbatical at Wesleyan, loaded him down with books to read and suggested that they work together closely. Cook had a different idea: he wanted to do this project on his own.

“The school didn’t know it, but I went ahead and did a distinction thesis without ever going back to that office. It gave me the idea that I actually could write something.”

The next step in his writing career came courtesy of the U.S. Navy. He had been drafted after his surgical residency for service aboard a submarine. “If you want to write, I recommend submarines,” he said. “The sun doesn’t come up; it doesn’t go down.”

Cook surely belongs to an unusual coterie of writers, possibly consisting of just one, who typed a manuscript during a 13-day stay in a decompression chamber, all the while listening to fellow divers play country music (which he grew to detest). Year of the Intern was published and delivered a critical look at medical school education, but the book didn’t sell as well as he had hoped.

Five years elapsed before the publication of Coma. During that time he studied the publishing industry, read numerous best sellers, and wrote television screenplays. From these experiences he gained a much surer sense of how to engage readers in suspense. All of the techniques he learned are embedded in Coma. He also developed a conviction that his books should go beyond entertainment and educate the public on important scientific and medical issues of the day.

Since then Cook has regularly turned out novels with titles such as Sphinx, Fever, Outbreak, Vital Signs, Fatal Cure, Toxin, Vector, Marker, and many more. All of them, he said, require more research than many people envision. For example, several of his works feature the protagonist Jack Stapleton, a pathologist (and Cook’s alter ego). To understand how medical examiners work, Cook not only spent time at morgues in Miami and in New York, he also took a course in forensic pathology.

Lest any aspiring writers think that the process of writing becomes easy, Cook had this curious admission. “I have a crisis of confidence every time I start a new book. I think of myself very strongly as a doctor who is struggling to write rather than as a writer who happens to be a doctor.”

The Friend Is More Important Than the Ask 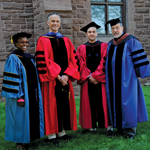 HONORED WITH THE BINSWANGER PRIZE FOR EXCELLENCE IN TEACHING