July 6, 1944, the day of the Hartford circus fire, has been dubbed “The Day the Clowns Cried.” The blaze, which claimed the lives of 169 people, mostly women and children, and its aftermath was the subject of We Can’t Reach You, Hartford, a theater production offered during Reunion/ Commencement 2007. It was a collaborative venture: COL major Stephen Aubrey ’06 was drawn to the historical incident since he’d first learned of it in 1991–and painstakingly researched the people and events–and theater major Jessica Chayes ’07 directed it as her senior thesis.

The work sprang from a writing class with Assistant Professor Matthew Sharpe. “I wanted a true story that could be staged in an artistic and visual way,” Chayes recalls. “I had never heard of the circus fire, but as we talked with professors, it became clear that many people in the area had relatives who were touched by that tragedy. Eight thousand people had attended the circus that day, and it became compelling.”

Aubrey’s search for original sources brought him to a box in the basement of the Hartford City Hall, where small personal items unclaimed from the tragedy still wait. “It was a very powerful experience to see these things, to hold a pair of eyeglasses,” he recalls.

He also read the book, The Circus Fire: A True Story of An American Tragedy (Doubleday, 2000) by local author Stewart O’Nan, who loaned the young playwrights his research, including transcripts from conversations with survivors, now deceased. O’Nan also attended the first workshop performances the two playwrights offered.

Both Chayes and Aubrey agree that the audience at Reunion & Commencement was special. They enjoyed the range in ages seated around the stage–from families, to younger alumni, to those who could remember the event. Their audience even included survivors who thanked them for honoring all those lives lost and those terribly altered on that one afternoon.

Chayes and Aubrey were also gratified by the reaction to the character of the clown, Emmett Kelly Sr., played by Kieran Kredell ’08. “We could tell we’d gotten it just right,” said Aubrey. “People were nostalgic; they told us about times they had seen Kelly perform. It was very moving for the actor to see that he had touched them with his portrayal.”

As for the Q & A that followed: “It was an audience that asked really insightful questions,” Chayes recalls. 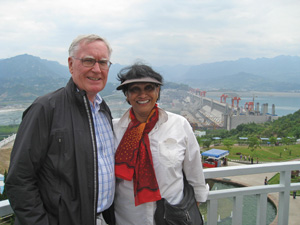 TALES OF THE CANNON