Richard Grossman, professor and chair of economics, specializes in economic history, among other areas. He came to Wesleyan in 1990, following a stint as a visiting international economist at the U.S. Department of State. His book, tentatively titled Unsettled Account: The Evolution of Commercial Banking in the Industrialized World Since 1800, will be published by Princeton University Press in 2010.

DAVID PESCI: Economists generally agree that recessions are inherent periodic components of a broader economic cycle in a developed economy like ours. Do you agree?

RICHARD GROSSMAN: I do. Business cycles have been constant features of the industrial—and pre–industrial—economy, and economists and statisticians have been studying them for about 150 years. Of course, you can’t have a business cycle expansion without having a corresponding contraction, so periodic slow–downs are all but inevitable. That doesn’t mean that these contractions have to fall to the level of severe recessions.

DP: How is this recession different from similar periods the country faced?

RG: As the financial crisis erupted during the fall, the media repeatedly wondered aloud if we were headed towards another Great Depression. We are certainly in a severe recession, but the economy is in much better shape than it was during the Great Depression. Remember, back in the 1930s, the unemployment rate topped out at about 25 percent; the January 2009 unemployment rate was 7.6 percent. The current situation will deteriorate before it improves, but it isn’t going to reach Depression–era levels, not even close. Relative to post–World War II recessions, things don’t look quite as rosy. Eleven months after the onset of the most severe post–World War II recession in 1948, the unemployment rate had risen to five percent above its pre–recession level, compared to a rate of about 2 percent above pre–recession levels now. However, the unemployment rate has not yet peaked. So there is good reason to be worried.

DP: Is this recession affecting a greater percentage of people than in the past?

RG: Total economic output (real GDP) in the fourth quarter of 2008 fell at an annual rate of 6.2 percent. If this rate of decline persisted for an entire year, it would surpass the worst one–year drop in GDP since World War II. Consumption also fell by between 3 and 4 percent during that quarter. Overall, I’d say that this decline is broadly and deeply felt.

DP: Many say the recession was started by banks extending credit to bad risks, especially in residential real estate. Is there a historical precedent for this?

RG: As recently as 2006, the net value of household real estate was equal to more than 80 percent of GDP. The overextension of credit to the residential real estate market and the run up and collapse of housing prices were key elements of the crisis. There are lots of historical precedents for the recent crisis. The pattern of economic boom, accompanied by speculation on one asset or another, has been a constant feature of industrialized economies during the past 200 years. The object of speculation changes from time to time: in the U.S. right after the Civil War, it was railroads; in Britain in 1890, it was Latin American debt; at other times it has been grain, limited liability companies, and real estate.

DP: Within weeks between September and late October the DJIA and NASDAQ both lost close to 40 percent of their value. Why did the financial unraveling happen so quickly?

RG: It takes a while for the economy to slow down. Declines in sales lead to declines in orders, which lead to layoffs, which lead to further declines in sales and so on. However, as investors see declining corporate earnings and anticipate further declines, there is no reason for them to wait before selling their shares. In fact, they have an incentive to be first. So the market reacts quickly, anticipating future changes in the real economy.

DP: Does this mean that the stock market, which was presumably overvalued before, is now under–valued?

RG: You don’t want to ask my investment advice—I’m sure Wes alums have already lost enough in the market without getting bad advice from me!

DP: Is the path out of a recession that happens quickly different from recessions that occur more slowly?

RG: I’m not sure that the rapidity of a recession’s onset is a good guide to how long it will take to get out of it. I haven’t looked at the data, but I suspect that the duration of a recession is determined more by the underlying economic causes and how long they persist, the extent to which economic institutions hold up, and the degree to which government policy helps.

DP: What else is important to know about this recession compared to ones we’ve had in the past?

RG: One interesting feature of this recession has been how long it took the National Bureau of Economic Research (NBER) in Cambridge, Mass., the official arbiter of when we are in a recession, to pronounce it as underway. In the past, such declarations have typically been made closer to the time that the recession started. The NBER announced in December 2008 that the recession had started in December 2007. So we went from being—officially anyway—in a cyclical expansion, to being in a recession that was already a year old. I’m not sure that this has any substantive effect, especially since everyone knew that the economy was slowing, but it is interesting and unusual.

DP: Has a government “hands off” approach ever worked?

RG: With a few exceptions, governments did not increase spending in response to economic downturns in the 19th century—this might explain why many of these downturns were deep and long lasting. These days, a slowdown in economic activity will trigger various “automatic stabilizers,” such as unemployment insurance and welfare benefits, and so a certain amount of additional government spending is assured. I wouldn’t necessarily support more government spending during a run–of–the–mill contraction, but I believe that this recession is sufficiently serious to warrant more substantial fiscal intervention.

DP: Some are touting government intervention and renewed or intensified regulation of segments of the economy. How has this strategy fared in the past?

RG: It is fair to say that regulatory failures contributed to the current crisis. It is reasonable for policymakers to revisit the regulatory set–up, as they inevitably do following financial crises. There are important limitations on what regulation can do, however. First, regulations that are too stringent can choke off economic activity. I know it might not look that way at the moment, but our financial system has played an important role in keeping our economy strong and growing throughout our history. We could reduce traffic deaths to a fraction of their current level if we armor–plated every car and made the national speed limit 35 miles per hour; similarly, we could make the financial system virtually crisis free, but the cure might be more costly than the disease.

The second issue is that the financial system evolves very quickly. New financial instruments are developed on a regular basis and the technology for moving and trading assets—frequently across jurisdictions—improves at a rapid rate. It will be hard for regulation to keep up with these fast–paced developments no matter how sophisticated and well–intentioned the regulations and regulators. We can and should do a better job of regulation, but we should also recognize that effective regulation must be combined with responsible monetary and fiscal policies.

DP: The stimulus bill has no substantial tax cuts. How has this approach to recessions fared historically?

RG: History provides no magic formula. The most direct way to boost spending into the economy is for the government to do it. I would argue that we should be targeting infrastructure spending—roads, bridges, and public transportation, for example. The country needs it and it would stimulate the economy. Obviously, government spending isn’t free of problems, but properly implemented—and that is by no means certain—it provides a more powerful stimulant than tax cuts. It is reasonable to include tax cuts in a stimulus package, although cutting the taxes of the very wealthy will not add as much to aggregate economic activity as tax cuts to those with lower incomes. In terms of corporate taxes, I would favor an investment tax credit, which would encourage investment spending on the part of business.

DP: Has government intervention to remove toxic assets from bank balance sheets been done before on this scale, and if not, what kind of precedent does it set for large firms going forward?

RG: Governments in Sweden and Italy during the 1930s established new institutions to take over the industrial equities owned by the banking system, thereby getting them off the banks’ balance sheets and getting the banks out of the business of long–term industrial finance. It is possible that the new administration will set up the same sort of holding company for bad assets. Of course, the devil is in the details. What will the government get in return for these assets? Debt? Preferred equity? Common equity? Will the government take an active role in running the firms that receive assistance? And how will these assets be priced? Since there is no market for them at present, it is hard to come up with a good answer to that one.

The second part of your question raises the issue of moral hazard. This is a real and serious issue and there is no easy answer. I think it is clear to most economists—not to mention taxpayers—that the managers and shareholders in these banks need to bear a large share of the costs of a rescue, and the taxpayer should be protected as much as possible. However, saying that it is all the fault of the banks and that we should just let them all fail is not a sound option.

DP: Aside from areas that are receiving direct government investment, are there segments of the economy poised to grow in this recession environment?

RG: Sadly, I’d say that bankruptcy lawyers look like the best bet at the moment. I don’t have any strong opinions on which sectors will pick up the most quickly. And although I don’t give investment advice, I would say that companies that have acted in a risk–averse manner and, as a result, did not have their stock prices shoot up as rapidly as some of their competitors, will probably fare better. I think the same thing holds true among universities— those that have been expanding extremely rapidly will see greater retrenchment than those that have grown less aggressively. 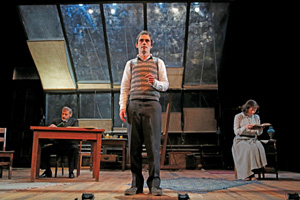 LETTER HOME: Living in the Navel of the World

Ten Photos That Shook the World