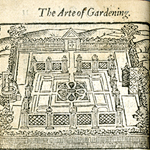 Harriet Rice Baldwin was just 14 years old when the Great Blizzard of 1888 hit Middletown on March 11. The storm raged on through March 14, depositing as much as 50 inches of snow in some parts of Connecticut. Her future husband, George Willets Davison (Class of 1892), then a student at the Wesleyan Academy in Wilbraham, Massachusetts, was a few days shy of his 16th birthday. Even the blizzard of January 2015, also known as Juno, falls short when compared to the Blizzard of 1888, which essentially shut down much of the Northeast for several days.

When she began collecting gardening books as a young married woman, Harriet Baldwin Davison may have been thinking about the Great Blizzard and how relieved everyone was when spring finally came. She may have reminisced about 1888 again in 1930, when the Davisons gave 276 gardening books to Wesleyan’s new Olin Library. That winter set an altogether different kind of record: the longest streak without measurable snowfall in Connecticut, 298 bare days from February 28 until December 22.

Mrs. Davison’s gardening books provide a lovely antidote to what seems like endless winter. They reflect the variety of English and American literature about botany, gardening, landscaping, orchards, and plants. They bloom with beautiful illustrations of fruits and flowers, apples and Zantedeschia (better known as calla lilies). While many of the Davison gardening books were published during the Davisons’ lifetimes, the collection also includes some true rarities, early examples that offer windows into horticulture of the past.

The oldest—and among the scarcest—book in the collection is Thomas Hill’s guide, The proffitable arte of gardening … published in London in 1568. The third edition of the first published gardening book in English, The proffitable arte was first issued five years earlier with the title A most briefe and pleasaunte treatyse, teachynge how to dresse, sowe, and set a garden. The proffitable arte, which is more than twice as long as the first edition, is held by only seven American libraries and a handful of British and European collections. Wesleyan’s copy is the only one in New England. Two of America’s premier garden libraries, The Huntington Library in San Marino, California, and The Hunt Botanical Library in Pittsburgh, also hold copies. The Davison copy, like most, is lacking a few pages. Although collectors always strive to find a complete copy of a desired book, when so few copies survive, even an imperfect copy, like a hardy perennial that survives a damaging winter, is highly sought after. A small book, easy to hold in the palm of your hand and perhaps carry out to your garden, Hill’s guide contains “secretes in sowing and planting,” along with historical information about gardens of antiquity and tips for the use of garden plants in medicine. Garlic, for instance, is a useful antidote for poisoning. The guide includes just a few woodcuts as illustrations, including a formal, geometric garden in the French style that was so popular among the English upper class until the mid-18th century.

Less scarce, but still held by fewer than 30 American libraries, is Mrs. Davison’s copy of The Violet Book, by A. and D. Allen-Brown (London: John Lane, 1913). Illustrated by Irene M. Johns with full-page color plates of exotically named violets, The Violet Book combines practical hints for growing with history and anecdotes. The Misses Allen-Brown, authors of the book and sister proprietors of the Violet Nurseries in Henfield, Sussex, were known for their violet soap and other beauty products featuring the restorative aroma of violets. Featured in Gardening for Women, written by Viscountess Frances Garnet Wolseley in 1908, the Allen-Brown sisters typify the aura of respectability that flower gardens lent to businesswomen—and, indeed, women book collectors—in an era before our own.

Harriet Davison was herself an avid gardener and a member of the Greenwich Garden Club. In her Christmas 1941 collection of essays, Garden Notes, privately published for distribution to friends and family, Mrs. Davison describes with delight the beauty of the gardens she visited all over the world as she traveled with her husband. Her garden of books continues to bloom and enrich the holdings of Wesleyan’s libraries.