Some old aerial photos, a handmade map, a bright idea?that and a lot of hard work may provide a whole new way to evaluate and influence the rapid growth of Connecticut’s Middlesex County.

The project began when Phillip Resor, assistant professor of earth and environmental sciences, brought a guest lecturer in the spring of 2004 to his class on geographical information systems. Sandy Prisloe, with the University of Connecticut’s Center for Land-use Education and Research, discussed how satellite data is providing quantitative measurements of the changes in Connecticut’s landscape and, by inference, the impact on quality of life and the environment.

“Sandy mentioned that he had a map from the 1970s that showed the areas that were farmland at that time,” says Resor. “He also mentioned the data that was recently created by a group at the University of Connecticut showing land cover and said that it would be interesting to compare what was found in 2002 to the data from 1970, to see how things had changed.”

Jessica Pfund ’05, who was in search of a possible research project, was intrigued. “Many of my classmates were doing studies that were more theoretical,” she says. “This seemed to have scientific and social implications for the local area that could have a relatively immediate impact.”

“I don’t think when I started I had an idea of exactly what I was getting into,” she says, now almost a year into the project. “It’s been very interesting and exciting, but it’s also been a lot of work.”

She wrestled with the need to reconcile differences in the way data was gathered in 1970 versus 2002. Images from the older study were based on a handmade Mylar map that was, in turn, based on aerial photography. Satellite images produced the 2002 data.

“The images and data didn’t match up,” says Resor. “The satellite images are precisely located, but can’t reveal anything smaller than 30 meters. By contrast, the 1970s map captured small details, but they weren’t necessarily as well located. So we had to find ways to account for the differences.”

There were some other challenges too. For instance, the old maps identified the land as “active agricultural,” “inactive agricultural” or “nonagricultural.” Satellite images provided more than a dozen different characterizations, including assessments of soil viability for agricultural use and disposition of wetlands.

Additional interpretive challenges came about because plots of land identified by Lands at as large lawn are as could in actuality be active or inactive cultivated fields. Ambiguities in the image s required Pfund to make many personal visits to properties to verify their use.

Resor and she anticipated completing the study before the close of spring semester. They planned to publish a report and present their findings at town meetings in Middlesex County. The towns can use the data to plan new housing and business construction.”

A lot of towns in Middlesex County are proud of their rural atmosphere,” Resor says. “This information can help them maintain that atmosphere as they move forward with new developments.”

The study already has generated a beneficial result. Resor received a servicelearning grant from Wesleyan to expand his efforts. This spring, his students are working on similar projects for the Nature Conservancy, the Connecticut River Coastal Conservation Commission, the Middlesex LandTrust, and the Town of Portland.

“It’s been pretty interesting to do a scientific study that actually has social implications and affects local issues,” says Pfund. “People don’t often think of scientists working that way. It’s been a very rewarding project.” 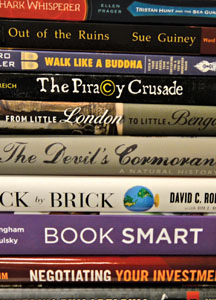 Marshall Johnson’s Research is Out of This World